Croats are in love with their bread. They eat it on the side with every meal. Even the starchy ones, such as pasta, rice or potatoes.

Bread (rolls, swirls, muffins, etc,) of all flavours is the commonest snack in Croatia. Just look at the number of bakeries in the country!

Still, the way we like it most is with a spread. And we like it richly applied. No skimping. 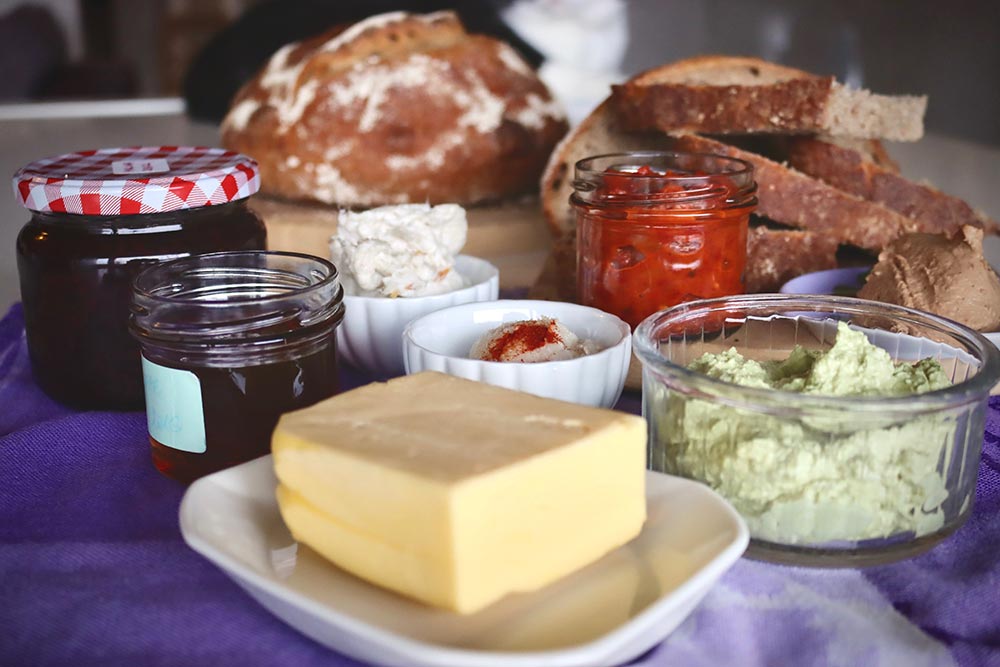 No cutting the bread thinner either. And definitely no counting how many slices you end up eating.

‘Bread with a spread’ (kruh i namaz) is a Croat’s perfect breakfast and dinner.

Now the only thing to worry about is choosing among the many bread spreads we have. So, let's dig into the Croatian culture of breads and spreads.

Bread and paté (kruh i pašteta) is one of the most venerated combinations in Croatia. It can be a hearty breakfast (oh, yes!) or a light dinner. 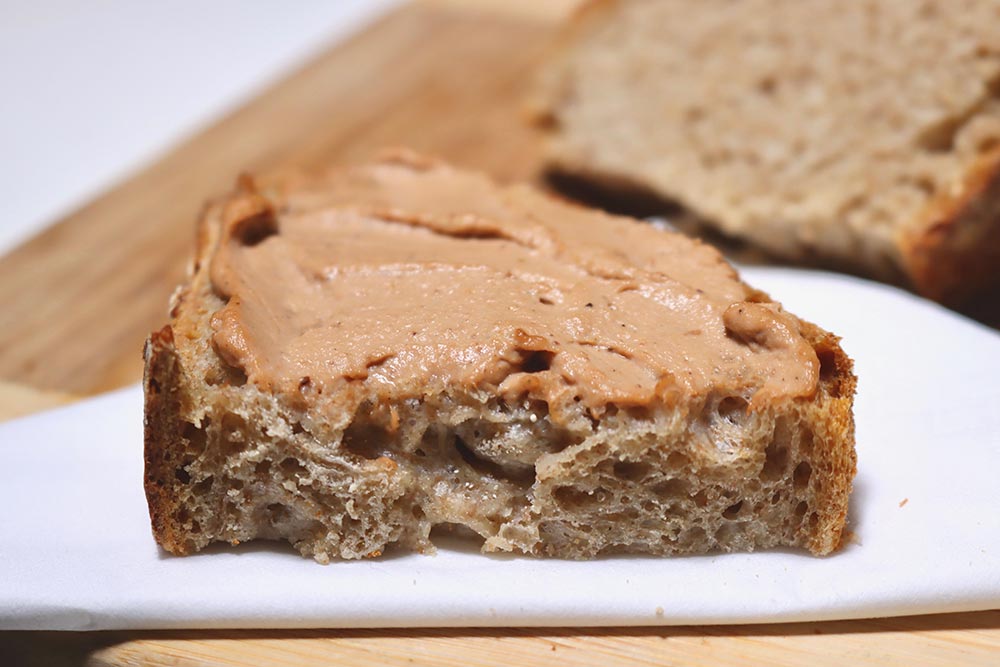 Children get to eat it as an afternoon snack, especially in kindergarten or school. As adults, we feel nostalgic for those carefree days. Which is why we still sneak a slice of kruh i pašteta in between meals. It has nothing to do with being hungry!

You should know that Croatian paté is lighter than a French-style paté or terrine. That’s why we never eat it as our main meal: lunch.

And that’s why it’s totally acceptable to top pašteta with some cheese or ham. Yes - eat it as a sandwich spread!

In Croatia, bread and lard (kruh i mast) is as old as time. There are many variations on the theme, but one thing is certain: the nation grew up on it. 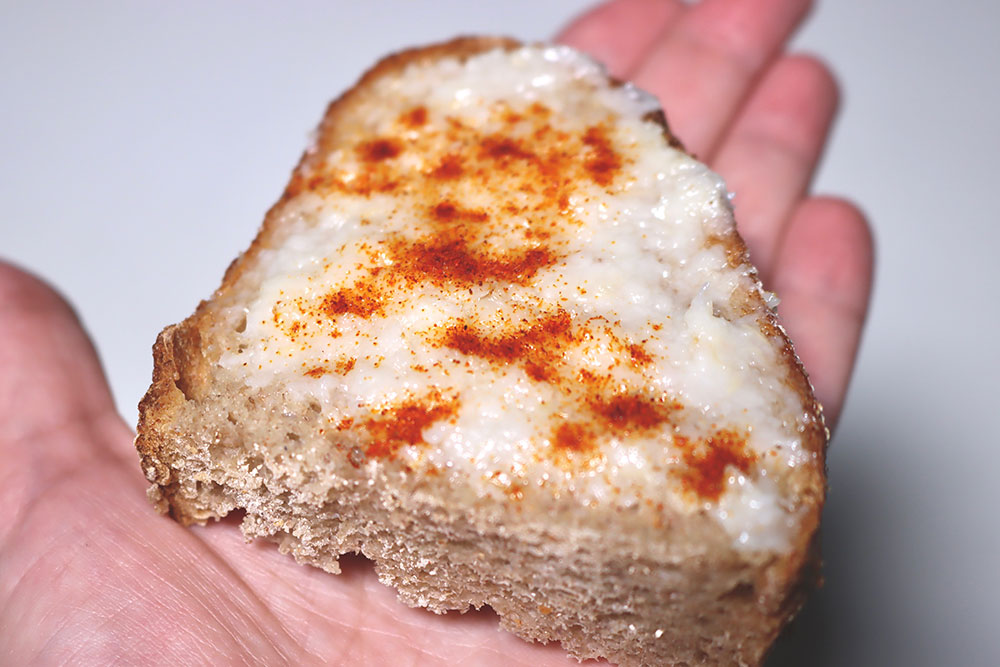 In some regions of Croatia, lard is not merely lard. Across north-western parts we have lard with bits of bacon. This is called zabil in Međimurje and kosana mast in Varaždin and Podravina.

The Germans will know it as Griebenschmalz and the Austrians as Grammelschmalz.

When it comes to flavour, we can eat it sweet or savoury. Some people prefer it sprinkled with sugar. Others swear by the savoury version: spiced with salt and red paprika.

Kruh i mast calls for rustic bread: rye, whole-wheat spelt, corn. Anything that, in the old days, could stay fresh for a long time.

Nowadays, kruh i mast is having a comeback. Just like lard itself is being revived as healthy. But there is a generation, somewhere in between, who frowns upon it.

Those kids grew up on margarine.

In September there is hardly a household which doesn’t make their own ajvar. Red peppers are roasting everywhere. Entire streets and neighbourhoods are engulfed in these sweet fumes. 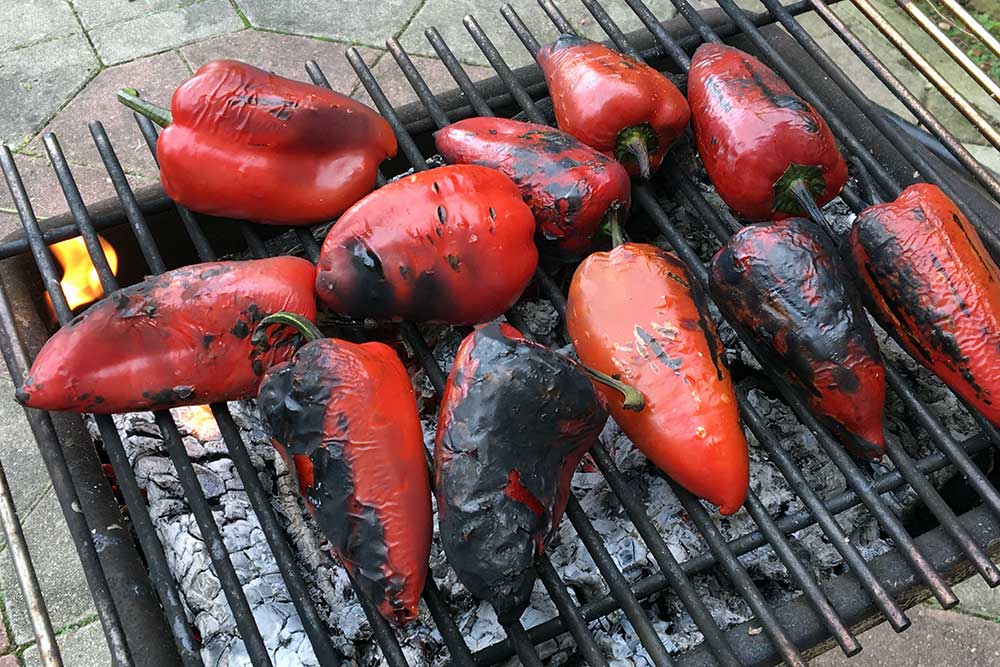 This is the time when you don't need to choose a spread for bread. Just do as most Croats do  and indulge in bread and ajvar (kruh i ajvar).

For weeks, we might hold off from eating other food. It’s even acceptable to substitute a well-balanced lunch for kruh i ajvar. 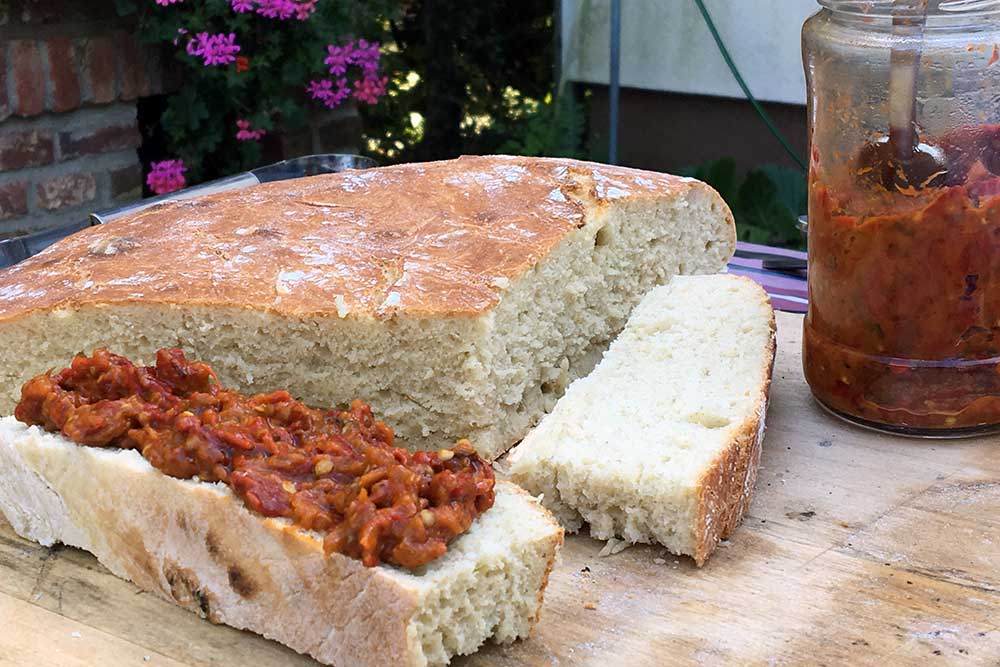 Later in the year, ajvar turns into a relish. We enjoy it on the side, usually with meat (think ćevapi!). And just like a Hollywood actor, it wins an Oscar for the best supporting role.

It arrived from Italy, more specifically Veneto region, as baccalà in bianco. This creamy spread is made of salted cod and lots of olive oil. What’s not to like?

Honestly, cod spread (bakalar na bijelo) is an acquired taste. It’s very strong so you either love it or hate it. Or you learn to love it.

At which point you can’t stop eating it. 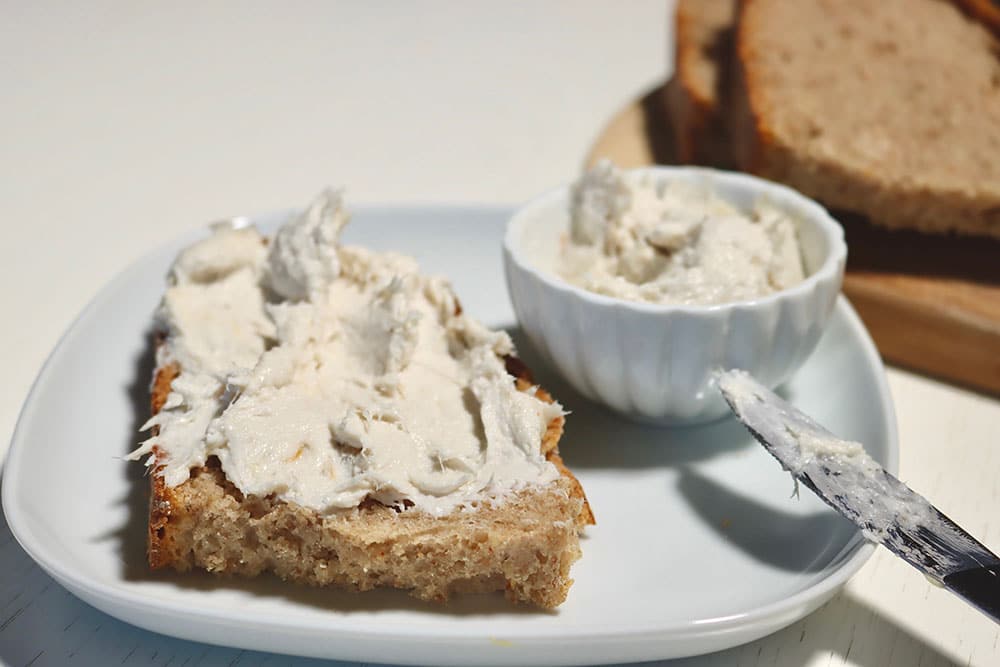 Baccalà in bianco used to be specific to Istria and Kvarner – Rijeka included. But these days you can find it in most Croatian shops in a jar.

Homemade bakalar na bijelo requires a strong man’s touch. Actually, a tug. Because to make it perfect, stiff cod meat is beaten until smooth and fluffy.

My sin is to eat baccalà in bianco with a spoon – skipping bread altogether.

Croats love their cheese spread (sirni namaz). It can be anything from the commercial Philadelphia to the sophisticated, homemade versions.

The point is in flavouring. And here again, red paprika wins the day. Rustle up some cottage cheese and sour cream with a sprinkle of sweet paprika and your sirni namaz is ready to go.

The more upscale version found in restaurants is the Liptauer cheese spread. It has added butter, mustard and diced onions for a more complex aroma.

The recipe comes from Slovakian Liptov region but is known throughout central Europe.

Croats will add any fat to the cheese – as if cheese is not fatty enough. But for some reason, healthy veggie oils and dairy fat are a match made in heaven. 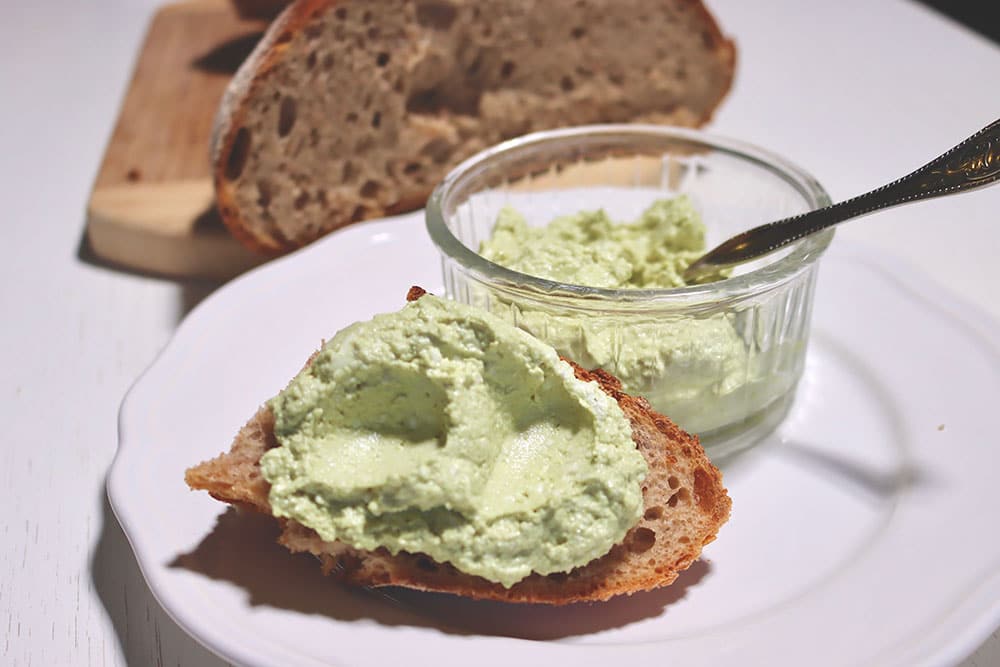 In Međimurje, they pair cottage cheese and pumpkin seed oil. When you mix these two, you’ll get an avocado green colour. But only if you use the best quality oil. Add a sprinkle of toasted pumpkin seeds too.

This is my go-to flavour. Not that I am partial, having Međimurje roots. The combination really is out of this world.

This simple food fed millions of people, for which it earned the linguistic medal: it became a metaphor. We say bread and butter when we mean someone’s livelihood, or when something is basic, staple and everyday.

Croats are not super crazy about bread and butter alone. But we can never go for bread and honey or bread and jam without the layer of butter in between. 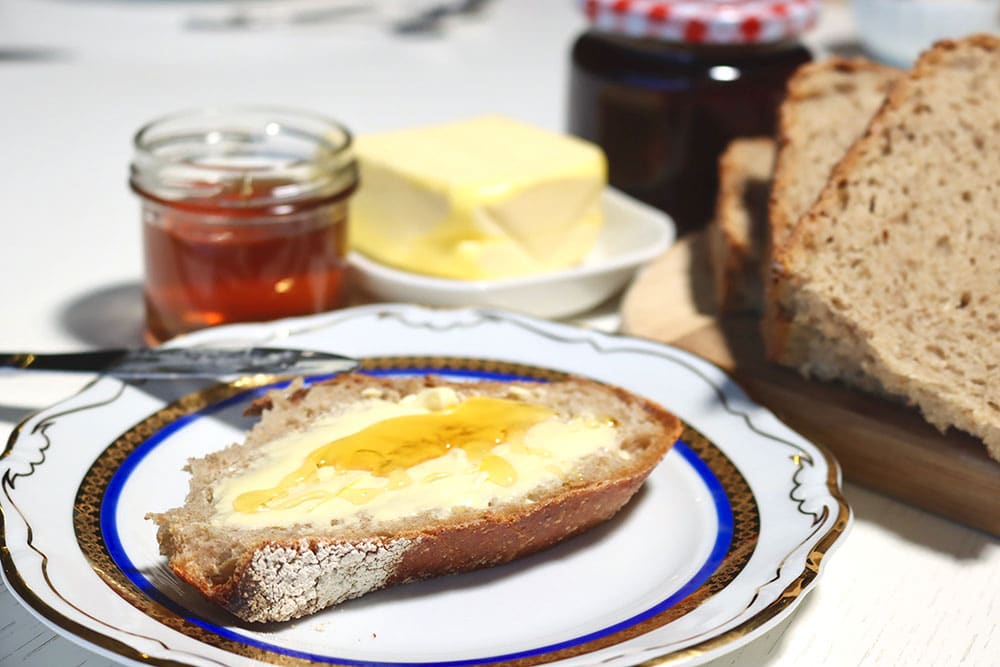 Call us spoilt but we love to take our buttered bread to the next level with drops of luscious honey.

Don’t leave Croatia without trying out favourite flavours. On the coast look for lavender, sage or thyme honey. And on the continent, you will love the deep earthy chestnut aromas.

Bread, butter and jam (kruh, putar i pekmez) is a timeless combo. No childhood is the same without it. And what we remember the most is our granny’s homemade jam.

In fact, if our memories are from a long time ago, they will probably be of a marmalade, not jam. The kind that is so thick, you can cut it with a knife.

The one that simmers almost all day long. That marmalade has so little water content it can last for years in a pantry. This is how plum or apricot marmalades are made in
Croatia.

Learn more about Croatian culture from my library of posts on Croatian traditions.

Which is your favourite bread spread?

Let me know if you want the recipe for my spelt sourdough bread pictured here!