Exploring Croatian genealogy, especially if you are of Croatian descent, is a lot of fun. And because we all feel magnetically drawn to our ancestry, knowing your folk is the source of great strength.

We say in Croatian krv nije voda (Blood is thicker than water). The lives of your forebearers are woven in our sense of self. But ancestry is also about a place. Where you come from is just as important as who you descent from.

Many of us have charted family trees. We collected dozens of anecdotes about our far predecessors. Why? Because we want to know what struggles those before us endured. What goals they strived towards so we can live our lives the way we do. 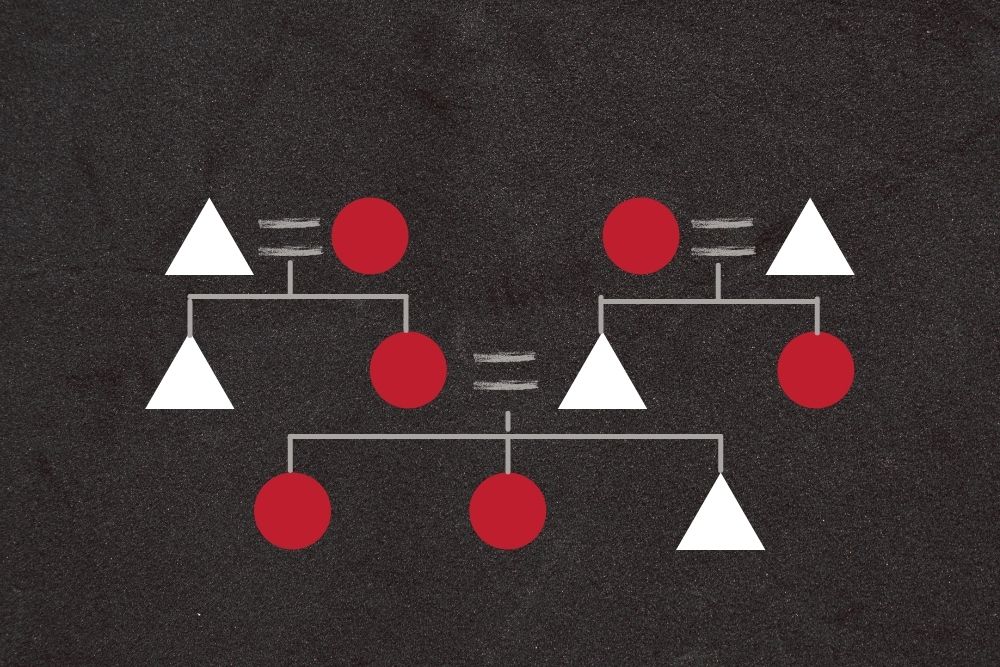 This environment and those traditions often get lost in the lines and symbols of Croatian genealogy charts. How could they ever capture the living emotions, and the hopes and dreams of our ancestors?

Yes, it is important to know the names of our kin. When you connect them to the Croatian words that represent family relations, you get a much wider picture. Finally, knowing how Croatian extended families work is priceless.

I will never forget my father's words on a truly dark day in my first year in London. 'Remember where you've come from', he told me on the phone. I was sobbing, life away from home seemed much harder than I had imagined.

In short, what he meant was not only that I come from Croatia. But that I have the strength of my Croatian ancestry within me.

So, let's see what Croatian families are made of.

Nowadays, most Croatian families are nuclear families, especially in urban areas. In other words, a household consists of two generations: parents and children.

But a household with three generations under the same roof is not completely uncommon.

For example, my mother-in-law lives with my brother- and sister-in-law and their two children. But my husband and me, as well as his two other brothers and their families, live in separate households.

Even when we don't live with them, every Croatian child has deep bonds with their grandparents. In a way, the strong influence of our baka and deda points to how important extended family is.

From grandparents to grandchildren

Extended family consists of both lineal and collateral relatives. In the past, and especially in rural areas, at least three generations lived in a household.

Grandfather (usually the father of the family) and grandmother were the first generation. Their children were the second generation.

Of them, sons could marry and stay living in the same household with their children. Daughters would move to their husbands' households. The sons' children were grandchildren – the third generation.

The importance of grandparents

Just from the number of words we have for grandfather and grandmother, you can see how important their role is in the Croatian family. These words reflect our emotional bond with them. Croatian grandparents can be both stern and guiding but also gentle and nurturing.

In fact, we think the parents' role is to be strict with children while the grandparents are here to spoil them.

In the last 50 or so years, as people moved to the cities, the extended family gave way to the nuclear one.

Demographic data shows that most families today are nuclear ones. However, the boundary between these separate nuclear families are not as strict as in the West.

My both sets of my grandparents, for example, lived in separate households. Yet, my emotional and mental bond with them was so strong that I might have lived under the same roof with them.

Connectedness across lineal kin is still a big feature of Croatian families. This is why grandmothers look after their grandchildren instead of sending them to a kindergarten. We fondly call this 'baka servis'.

And this is why our grandparents often move in with us when they are ill or too old to look after themselves. Unlike in the West, we have fewer elderly people in retirement homes.

In earlier times, it was common for one son to stay in the main household as the heir. He would inherit everything but was also responsible for taking care of the parents.

Such practice was common in areas with scarce land, such as Dalmatian inland and the islands. Other sons would get an education, while the daughters received a dowry and moved to their husbands' household. In more affluent areas, more than one son with their new families could stay and live under the same roof.

We call this patrilocal residence. It means that the woman leaves her family of orientation (her parents) to live with her new, family of procreation (her husband's family).

Nowadays, most families choose the so called neolocal residence. In other words, both male and female children leave their parents' home and form a new household with their spouse.

When this generation of children marries, the relations within the extended family turn more complex. Some members will be related through blood and others through marriage.

Notice that in Croatian, we have 2 words for parents-in-law. They differ based on the gender of the person through which the relationship exists. No man can have a svekrva and no woman can have a punica.

FUN FACT: HOW WOMEN AND MEN MARRY IN CROATIA

There is a derogatory expression priženiti se. If we say Ivan se priženio, it means Ivan married Ana and came to live with her and her parents. This was looked down on in the old days – remember patrilocality?

Croatians nurture a strong bond between the siblings, which continues long after they leave home. Their children – cousins to each other – will spend time together in their childhood. In many cases, the connectedness carries on.

This type of relatedness is called collateral kin. It exists within a generation. Siblings and cousins are the best example.

There can be no cousins without others joining our family. These are in-laws, or people with whom we create connections through marriage.

Whenever someone is -in-law to you in English, you know they are not your blood. In Croatian, each in-law has a specific word. Not only do we have many more words to remember, but each word is used only for a specific place in the family structure.

To make matters more complex, each relative's name changes depending on the gender of the speaker. Where English speakers use only brother- or sister-in-law, Croatians have six variations. All depending on the type of relation (blood or marriage) and whether the speaker is a man or a woman. See the image below. 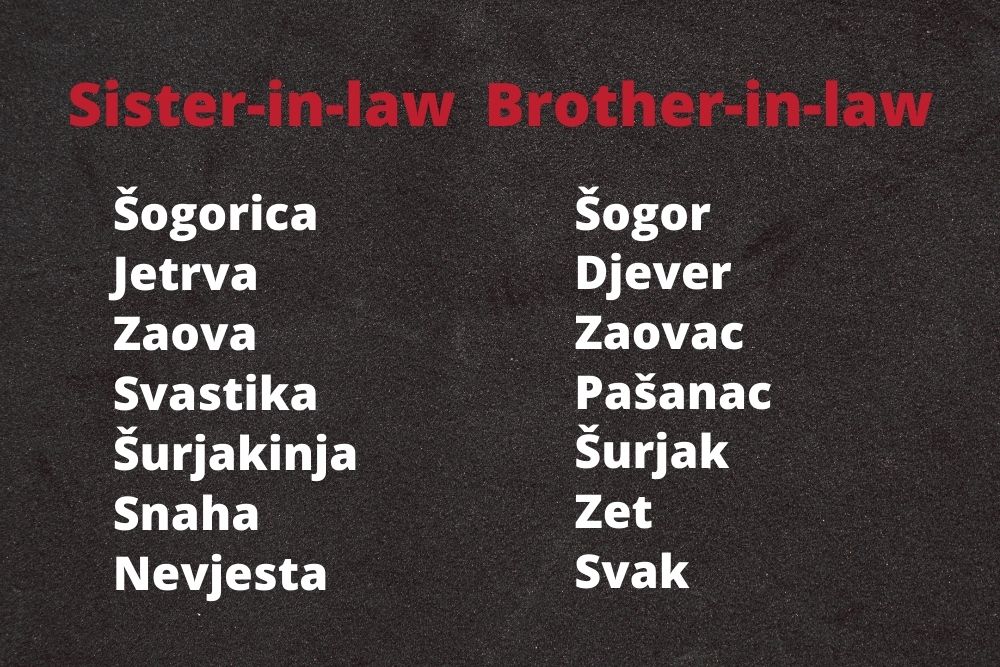 This genealogical precision is still preserved in small communities and rural areas. One reason is to keep track or who can marry whom in later generations.

My grandfather, for example, came from a tiny village where only four surnames existed. If you only used brother- or sister-in-law for naming your relatives, you would never know who your grandchildren could marry. Some people could have the same surname but not be blood-related and vice versa.

Let's see the ancestry chart when siblings marry and have children. Two pictures show different names for in-laws and cousins depending on the gender of the speaker. 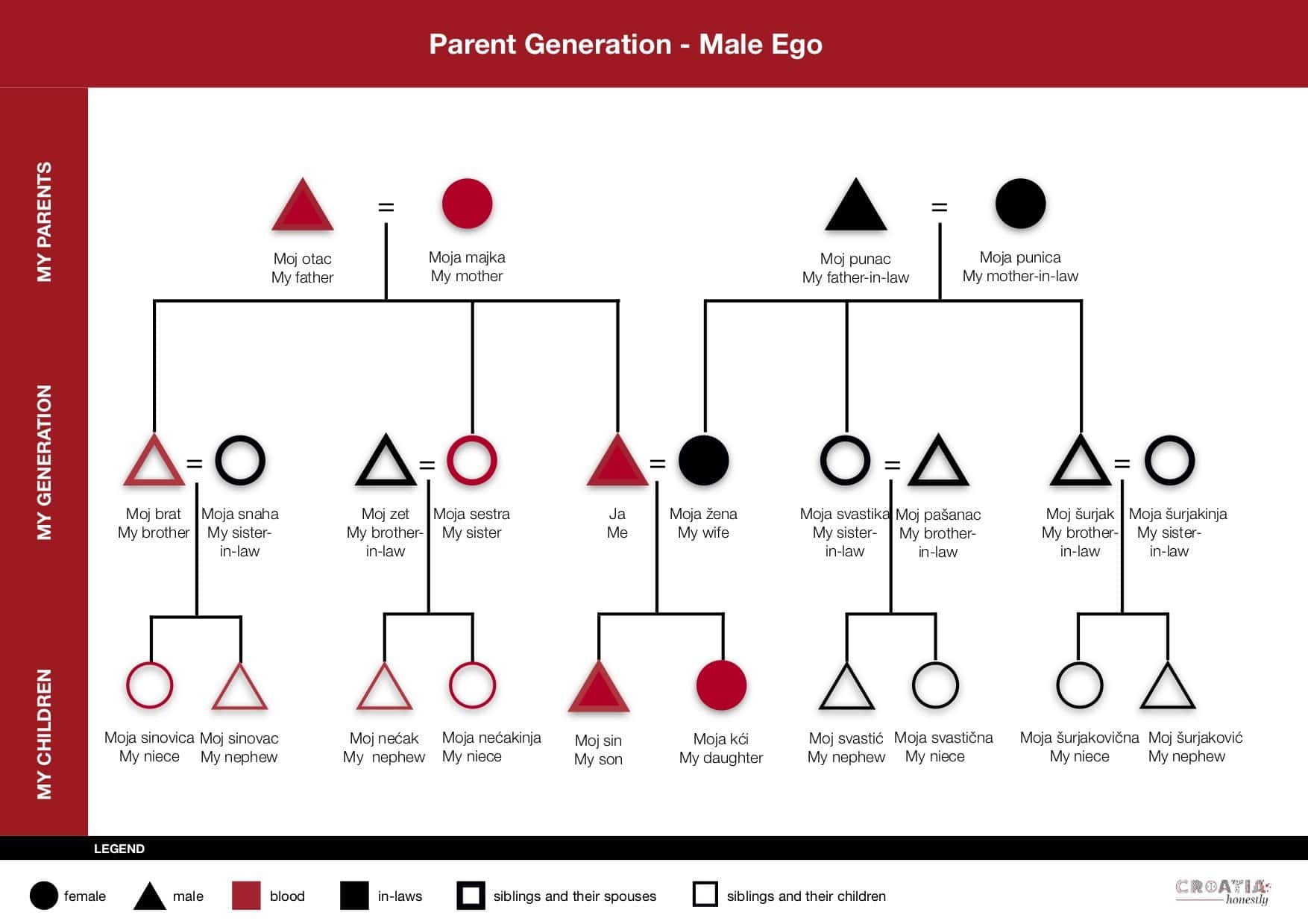 You as a man, your parents' and your childrens' generations

The names of your family members change when you are a woman! 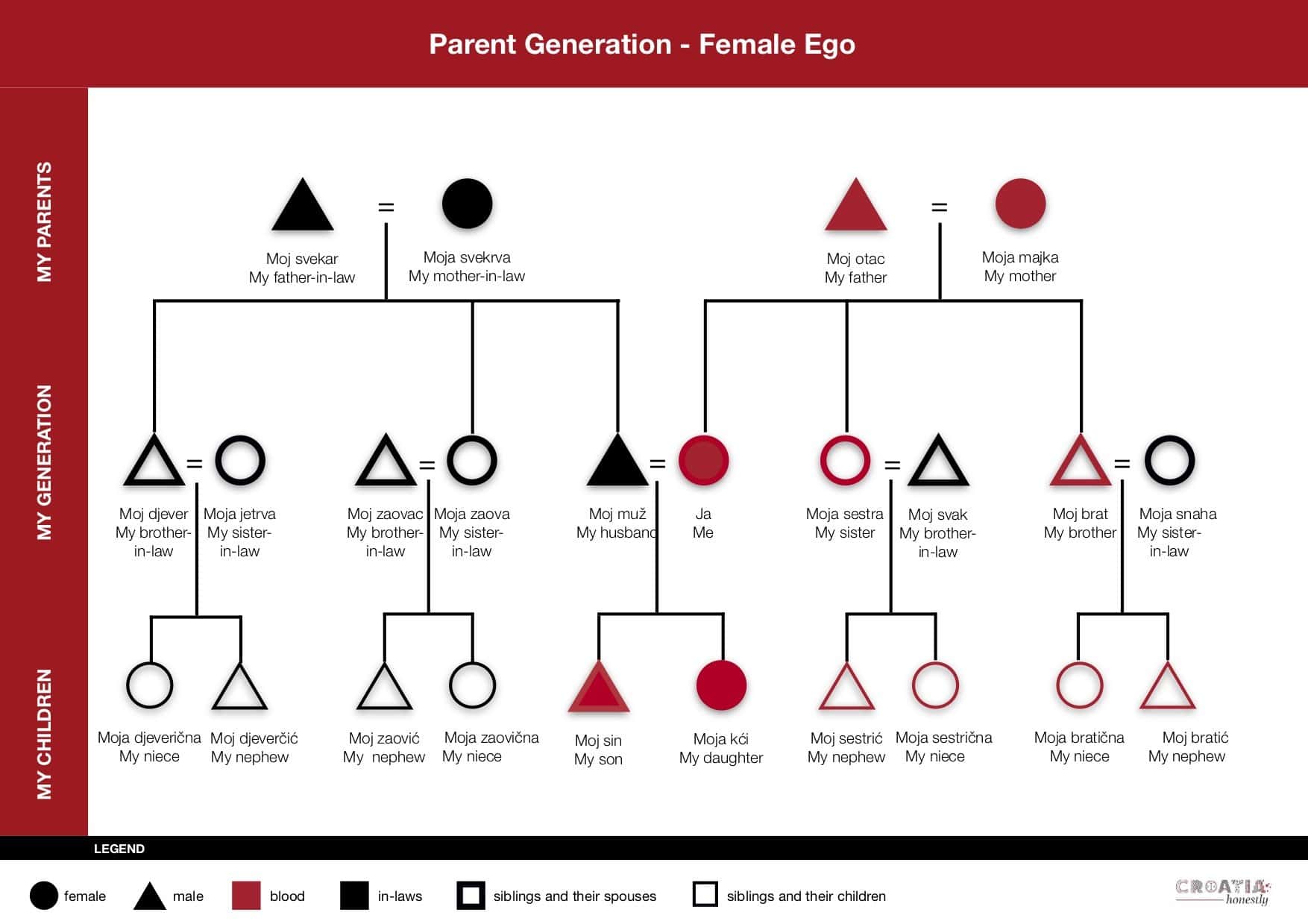 You as a woman, your parents' and your childrens' generations

Fun Facts: Siblings and their spouses

The English brother- and sister-in-law translates into a total minefield in Croatian.

How we count descent

If you ever charted your family tree, you noticed that there is almost no end to how many branches you can have. You probably discovered a distant cousin if you both started from your end.

For this reason, families (subconsciously) choose to place more importance on one side of the family. In the old days, the father's family carried more weight.

In such patrilineal descent, you would count as cousins only those family members who all had the same apical ancestor.

Go back to the chart and look for the red-coloured members. They are your blood kin and only those would count.

Today, most of us think of relatives in terms of bilateral kin. Both sides of the family are equally important and we carry on nurturing those relations.

Some of these names of Croatian family members are extremely difficult to remember. Don't think that all Croatians know that. We too had to simplify things. And this simplification happened as people moved to the cities and began living in nuclear families.

The first thing that got simplified was the brother- and sister-in-law differentiation. Today, we tend to use one word for the previous variations.

On the other hand, we still keep the difference between different types of uncle and aunt. Let's see. 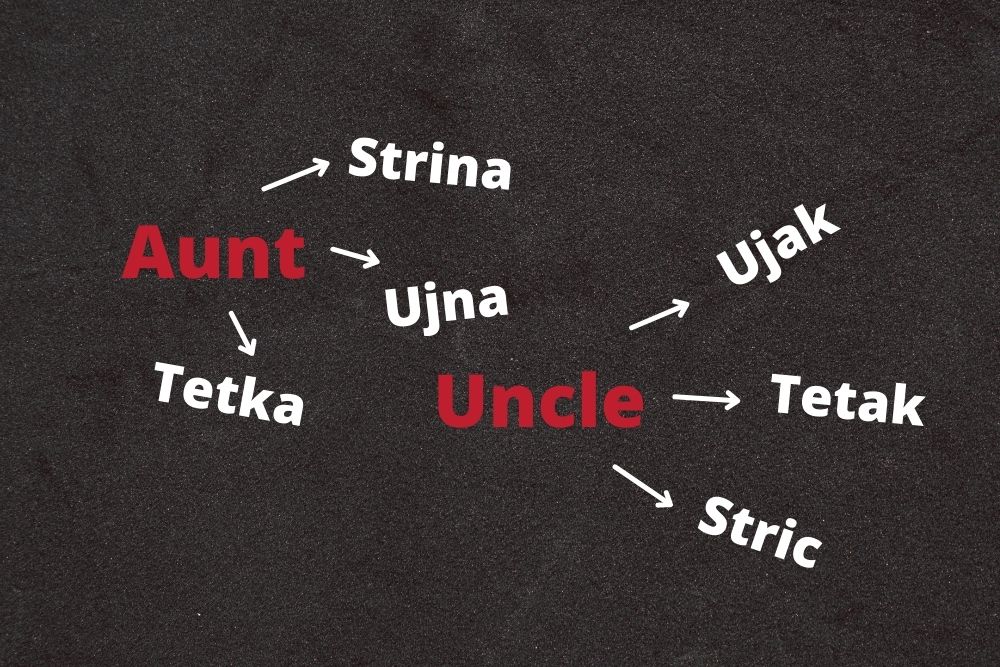 Uncles and Aunts in Croatian

Croatian uncles and aunts have a special place for children. If they are younger than their parent, they might even live in the same household for a while.

My husband, for example, lived with his aunt for a while. When children turn teenagers, uncles and aunts are often more approachable than parents. They act as a consigliere of a kind.

No matter how prevalent nuclear families are in Croatia, we still nurture close relationships with our extended relatives. It doesn't matter if we live in separate households, our emotions thin out the boundary.

Most Croatians consider their family as a source of strength and safety. They rely on their folk and they give back to them. If you ever saw a family gathering in Croatia, you know what I mean.

When we celebrate something in my house, we start counting the number of invitees from 16 up. The first 16 is just or family members.

Bonus gift for you 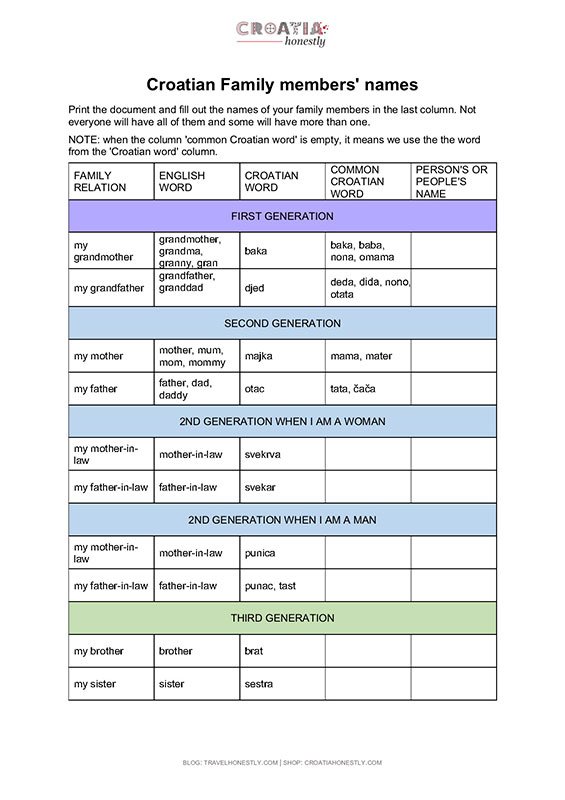 I CREATED THE WHOLE LIST OF 54 FAMILY MEMBERS' NAMES. IT'S A FULL croatian genealogy CHART WITH SPACES TO FILL OUT YOUR OWN RELATIVES.