Don’t hate me when I say this: I don’t like football. Being a passionate tennis fan, I much prefer individual to team sports.

But when it comes to Vatreni and World Cup, my tune changes drastically.

I will remain a football dummy for the rest of my life. But in the coming weeks, my heart will be on that pitch in Qatar.

It’s a ‘one heart, one soul, one Croatia’ kind of thing. 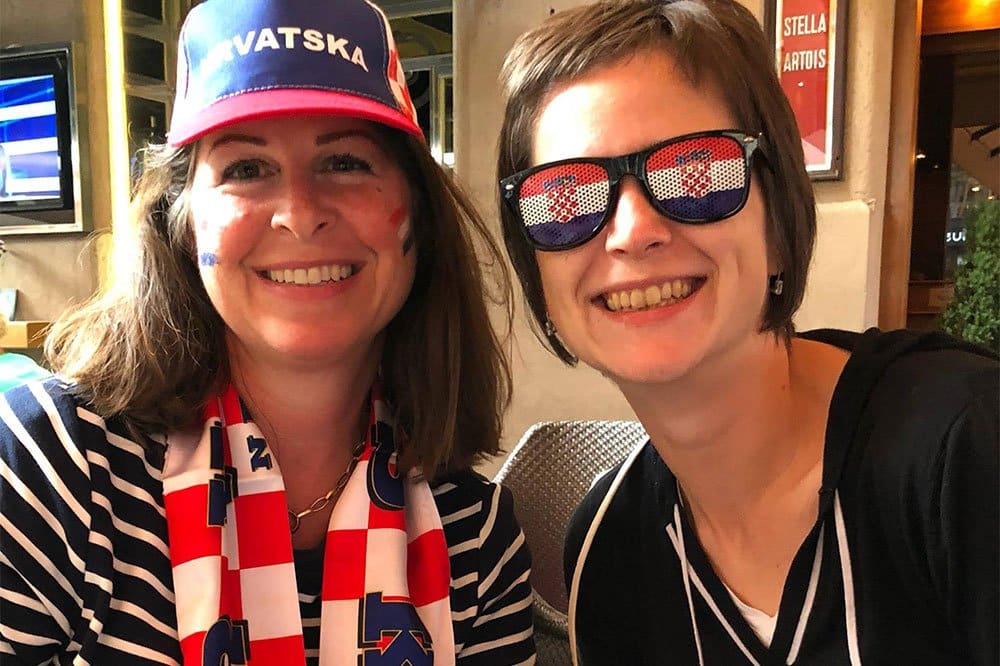 I don’t know how you feel about football. You could care little about it. Or be convinced it’s ‘the most important of the least important things in life’ (Arrigo Sacchi).

In either case, when Croatia plays at World Cup, it’s never only about football.

Much more is at stake. This is why you need to support Vatreni.

1 Vatreni bring us all together

There is a famous saying that describes how deeply Croatians can disagree with each other. ‘Dva Hrvata, tri stranke’ – which literally means two Croatians but three (political) parties.

It’s a stereotype, but there is plenty of evidence to support it. Most of the time, unfortunately, Croatians feel compelled to bicker about things. Being right or left in politics, thinking heroes or villains for historic figures... or something as prosaic as plain or strong flour in pancakes.

It saddens me to see us divided. Because sticking to one’s guns just for the sake of it often means running around in circles.

This is why World Cup is so magical. It snaps us out of our entrenched ways and makes us a part of the same fabric.

Are you geared for World Cup? You can get our Croatian T-shirts for you and your friends.

Of course, there have been other moments when the whole of Croatia stood together. The Homeland War is the best example. Then there were natural disasters when we all ran to help those in need. Think of the 2014 floods in Slavonia or the two big earthquakes in 2020 and 2021.

We would give the shirt off our backs to help those in need. In these moments there is one Croatia, one heart and one soul. No one cares if you make your šnenokle (paradižot) with or without biscuits.

The same type of blissful unity happens when Croatia plays at World Cup. Not only do we forget to bicker, but we ride the wave of togetherness without having to go through a disaster beforehand.

This sense of belonging is the deepest. And it happens first. Then, when football matches roll in, we schedule our lives around them.

2 World Cup gives us a reason to hang out

Croatians are known for their easy-going and laid-back lifestyle. The first thing that most visitors notice in Croatia is our healthy work-life balance. In other words, we always have time for friends. And we know how to take things easy – live the pomalo way.

This was one of the reasons why I eventually came back from London. In a world where everyone is running short of time, Croatians are determined to make time.

But things are changing here too. Working hours are longer, family members live further and further apart, and old friends tend to fade away from our lives.

When I was a kid, my whole family was home from work and school by 4 pm. So, it was easy to have afternoons and evenings filled with socializing. Most times people just popped by unannounced.

Nowadays, we are less spontaneous. Time seems more elusive and it takes more effort to keep in touch with friends.

But all this changes for the better when World Cup is on. We’ll free our days to watch football in cafes and bars around the corner.

Entire neighbourhoods become big living rooms where you run into your friends every day. You don’t have to ring anyone. Just show up and someone you know will be there.

In this strange twist of things, we become spontaneous again. By watching football that was scheduled years and months in advance, we get to see friends without making plans.

3 Our score fills us with optimism

Contrary to what we’d all like to believe, the world is not one big family of equals. If you come from a small country, you probably had to work twice as hard to get the same recognition. It applies to sports, science, arts and business.

Those of us who were born in Croatia and made our careers abroad know that well. When small countries succeed at something, they do so against all odds.

The reasons are simple.

Firstly, there are fewer resources available to individuals. Secondly, there is an emotional component; a sliver of doubt that you must battle all the time.

Now think of the Croatian football team at the World Cup in 1998 and 2018. We came third and second, respectively. These amazing results made Croatia the second-smallest country in the world to reach a World Cup final (after Uruguay).

How was that possible? If you ask Croatian manager Zlatko Dalić, he’ll say: ‘Želja u srcu je moć na terenu!’ (Desire in the heart is power on the pitch).

And this is exactly what happened in 2018. According to the media, the Croatian team gave the best underdog performance in the entire World Cup history. It was a combination of passion and hard work.

Something that enables even little countries to have big dreams.

Big dreams and a fiery heart can take you a long way. But only when you add grit do you get to be as exceptional as Luka Modrić.

With each match won in 2018, we got to learn more about the lives of our football players. The world was amazed by Modrić’s biography. Newspapers called it a rags-to-riches story because a little boy from a war-stricken hamlet became one of the world’s biggest football players.

Luka Modrić is one of three footballers in the world (with Messi and Ronaldo) who won the UEFA Men's Player of the Year, The Best FIFA Men's Player and Ballon d'Or awards.

What we in Croatia love about Modrić is his perseverance. He teaches us that it takes grit to achieve excellence. It’s not only talent and it’s certainly not luck.

In fact, sticking with what you love despite obstacles is what makes you stronger. In Dalmatia, they often do things in spite of, or despite something. Life, bad luck, war, you name it. And they say ‘iz dišpeta’.

Luka’s dišpet is a great inspiration. And we often draw on it when we encourage our kids on their path.

5 Croatia is known for our sportspeople

A few decades ago, being a Croatian in the world was not easy. People would ask you where you were from. You’d reply with enthusiasm:

‘Croatia?’, to which they would shake their head.

A reference to the old country sometimes worked. But nothing did the trick like the mention of the Croatian sportspeople.

‘Davor Šuker... Zvonimir Boban...Luka Modrić…’ they would continue to chant the names of our great ‘ambassadors’.

In the USA, I only had to mention Toni Kukoč and Dino Rađa, to be placed on the map of the world. In the UK, Goran Ivanišević opened the same door.

I fail most sports questions when my team plays at a pub quiz. And I will probably ask my husband for the thousandth time what an offside means. But even as a football dummy, I am now counting the days until we play in Doha.

Football in Croatia is more than just a sport. OK, I am not being very original. Every country can say the same.

But Croatia is a small country that makes its big dreams come true. If not every day, then at least during World Cup.

It’s time to enjoy the show.