Hi, my name is Andrea Pisac

Croatia Honestly is my blog where I show you how to connect with Croatian culture, food and places so you can grow from a fleeting tourist into a real local.

Everything on this blog is about Croatia. Maybe you've heard it before but not in the way I write about it. Here are my three mottos that make the difference.

look for the uncut gems

Croatia is a growing tourist destination and it’s only natural that you want to visit too. The problem is that what you see advertised is not the best thing about the country. Its biggest charm are the people and the way of life - things I write most about.

Most travel advice on Croatia is superficial. You end up chasing after the sights until you feel tired of your own holiday. I believe we should travel for experience. This is why I write about local culture, art and cuisine so you can bond with the places you visit.

feed your tummy and soul

Food is one of the biggest reasons why people fall for Croatia. But did you know that our best meals are still cooked at home? I wanted you to taste this homeliness so I wrote two bestselling Croatian cookbooks in English: Croatian Desserts and Croatian Classics.

Some things about me

If you asked for my official biography, here are the things I would mention:

What is Croatia Honestly about

Every year about 1 million people from around the world read Croatia Honestly. I am incredibly grateful for such a large audience. It feels great to be connected with so many Croatia fans. But the best of all is that my fans want more than what mainstream guides can provide.

I believe the reason for this is my singular approach: an in-depth and honest account of all things Croatian. Hence the name: Croatia Honestly.

The travel pieces on my blog are not only vague listicles. When you follow in my footsteps, you will get a sense of the local culture. I will give you stories about Croatian history and art as well as an insight into our everyday way of life.

When you become a regular reader of Croatia Honestly, you’ll feel a switch. You will no longer be just a tourist, parachuting in and out of the most popular destinations. Instead, Croatia will start feeling like a magical place that pulls you in.

And here’s why. I’ll show you not only things to do or places to see. You’ll see that how we live and do things here is why you suddenly feel at home.

The how of the Croatian lifestyle will make you want to come back. Over and over.

This is what happens to most of my readers. Once they scratch underneath the tourist surface and make Croatian friends, they want to move here.

And, of course, they want to eat Croatian food. Not only what’s on restaurant menus, but what we cook at home. And this is why both my cookbooks give you that lifeline with our daily life.

Dig deeper into my writing

Here are four posts that tell you more about my mission to uncover the real Croatia for you. This includes my manifesto: all the reasons why I do what I do.

Croatia Honestly Manifesto Today everyone is going somewhere to hunt for happiness. But to arrive at happiness END_OF_DOCUMENT_TOKEN_TO_BE_REPLACED

The ultimate Croatian Quiz – how Croatian you are?

This Croatian quiz will let you know how well you know the Croatian culture and mentality.There are END_OF_DOCUMENT_TOKEN_TO_BE_REPLACED

10 yummy secrets every foodie must know about Croatia

What do Croatians eat, you wonder. Well, in this post you’ll learn a thing or two about END_OF_DOCUMENT_TOKEN_TO_BE_REPLACED

Have I lost my way migrating back to Croatia?

When I decided to leave London and come back to Croatia, people stared at me in disbelief. END_OF_DOCUMENT_TOKEN_TO_BE_REPLACED

Here is my full story

how I began writing

I have been writing most of my life, but still, I always wondered what I should be when I grow up.

My first scribbling began when I was still a child. It started as a diary of a ten-year-old girl. By the time I was 16, I received my first award. The English-language ‘Current’ magazine named my piece the best short story of the year. I still keep the editor’s letter, signed off with ‘keep up the good work’.

Still, our society doesn’t see creative writing as a serious or safe job. So most people forget their passion and look for more ‘concrete’ ways of making a living. I did too, for a long time.

My surname Pisac – which in Croatian means a writer – is extremely rare. People often tease me about it: ‘so are you really a writer?’ Some also assume I made it up. I always thought life couldn’t be so simple as to send me a message in the surname.

Yet, everything I did had to do with writing. I studied Croatian and English literature and I published two books of short stories and a novel. My latest book Hakirana Kiti [Hacked Kiti, 2013] was short-listed for Croatia’s best novel in 2014. 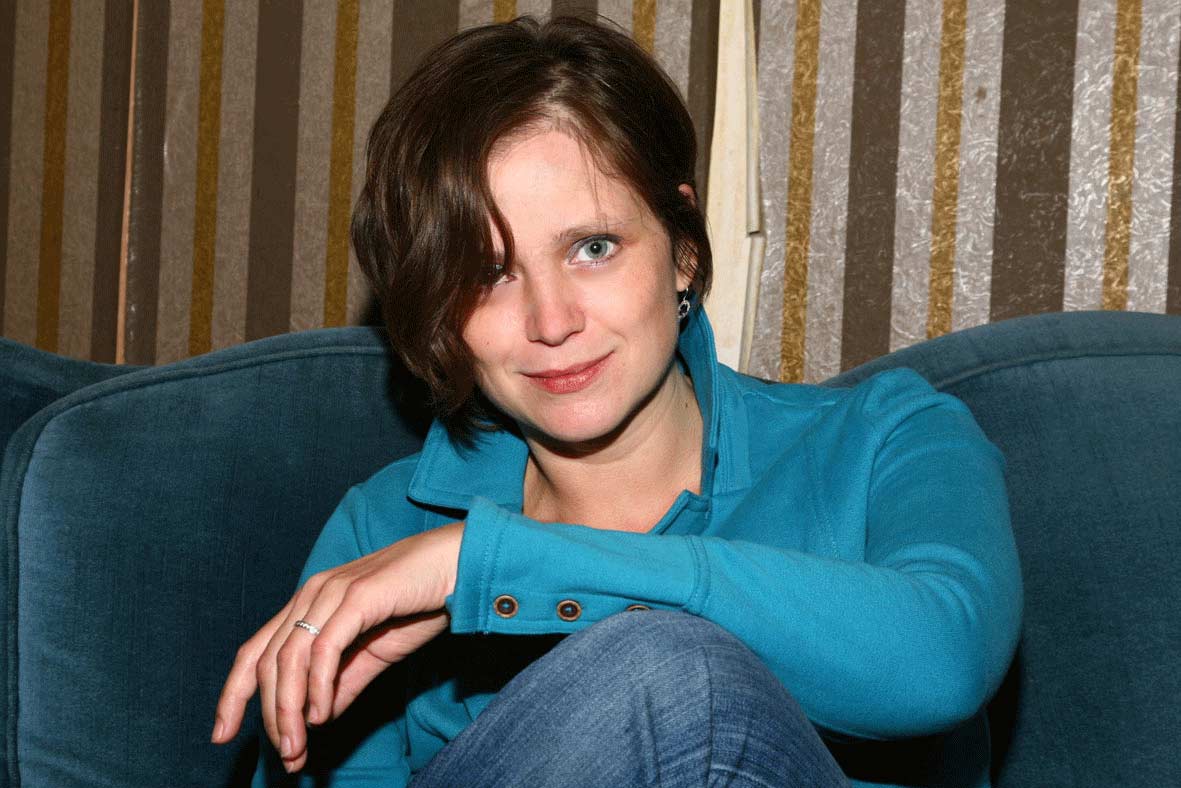 My portrait taken for the 'Hacked Kiti' promotion

How I became an anthropologist

After graduating from Zagreb University, I moved to London to continue my academic studies. I still didn’t know what I wanted to be, because ‘being just a writer wasn’t serious enough’.

I finished an MA and a PhD in anthropology, but, strangely enough, my topics continued to be about literature. I thought academic writing, with its weight and social proof, was the answer.

Anthropology is an amazing science that opened up my eyes to see the world in ways I never dreamed of. I started seeing ordinary things from new perspectives and learned that there was always more than one way to ‘catch a fish’.

I loved academic writing because I discovered every writing form is different. The more genres we master, the better writers we become. Sadly, academic texts reach a very small and specialized audience. It seemed such a waste of time for those exciting ideas to remain locked in an ivory tower. I always believed knowledge should serve all people, not only other scientists. 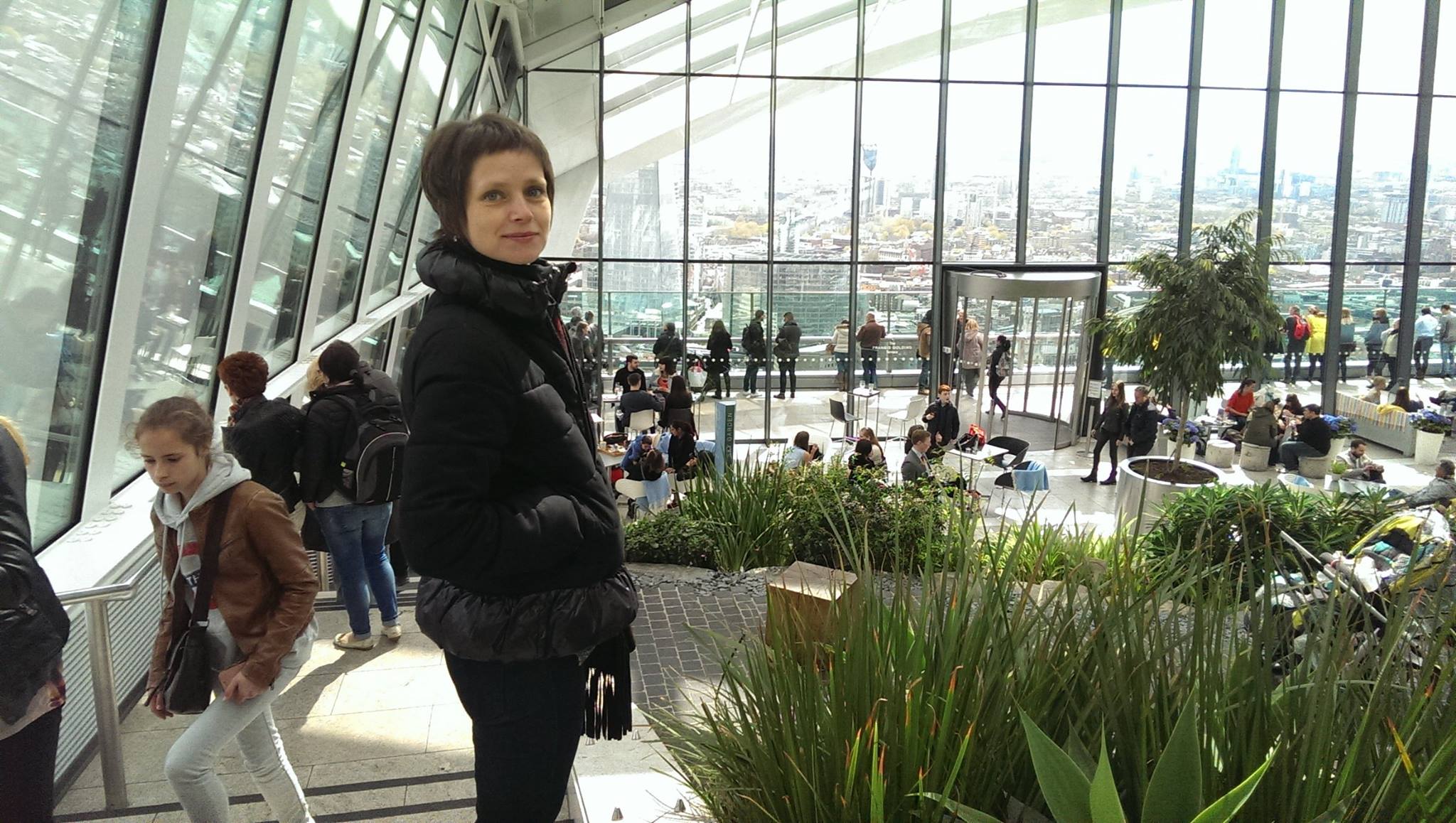 London will always be my home too

How I took a leap of faith

I spent several years working as a research fellow at Goldsmiths College, University of London. But being a successful anthropologist made my life more conflicting. I was split into two persons: a creative and an academic.

Neither community recognized the other. So I always had to change hats, depending on whom I was talking to. It was schizophrenic and it pushed me to make a risky but necessary move: I left both camps.

In 2014 life was scary: I was jobless, neither an academic nor a writer, and back in Croatia after 12 years. The only grounding I had was a small but loving group of family and friends. It turns out, this was the only thing I needed to create a happy fulfilled life.

In short, there are two reasons. One is love, and his name is Nik. The other is because ‘vegetables in England have no soul, no life...’ I know this sounds cryptic, so to understand it, read more here.

How I created Croatia Honestly

Years back when I still wondered what kind of job would make me happy, a friend told me something ridiculous: ‘there isn’t a job in the world that would make you happy, you must invent one for yourself.’ He was right.

I launched Croatia Honestly and started blogging slowly and tentatively. I never considered myself a travel writer, but Croatia was becoming a tourist destination and needed coverage that was different from usual guides. I was in a rare position: both a local and an outsider who was rediscovering her city with fresh eyes.

Anthropology and travel are both about uncovering and understanding different places. And creative writing is the spice that evokes a deeply personal experience that people can relate to.

This is what Croatia Honestly is about. I write about travelling for experience, not sights. And my posts inspire people to reconnect with things and places they have been taking for granted.

So, why the name Croatia Honestly? Because it is my candid account of the country’s highlights as well as its challenges. In British English ‘honestly’ is also used to express disbelief. As in ‘Croatia, honestly?… why would anyone leave London and live there…’

I did, and I’m having a blast. 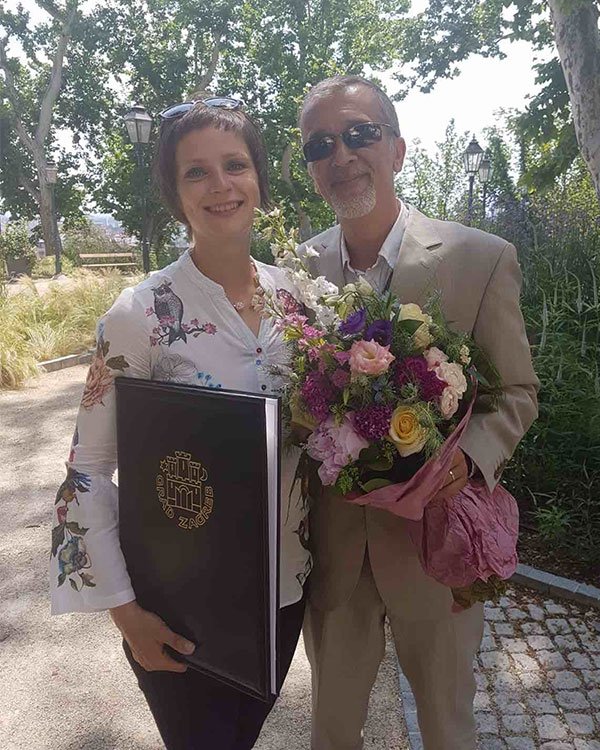 Me and Nik after receiving the City of Zagreb Award 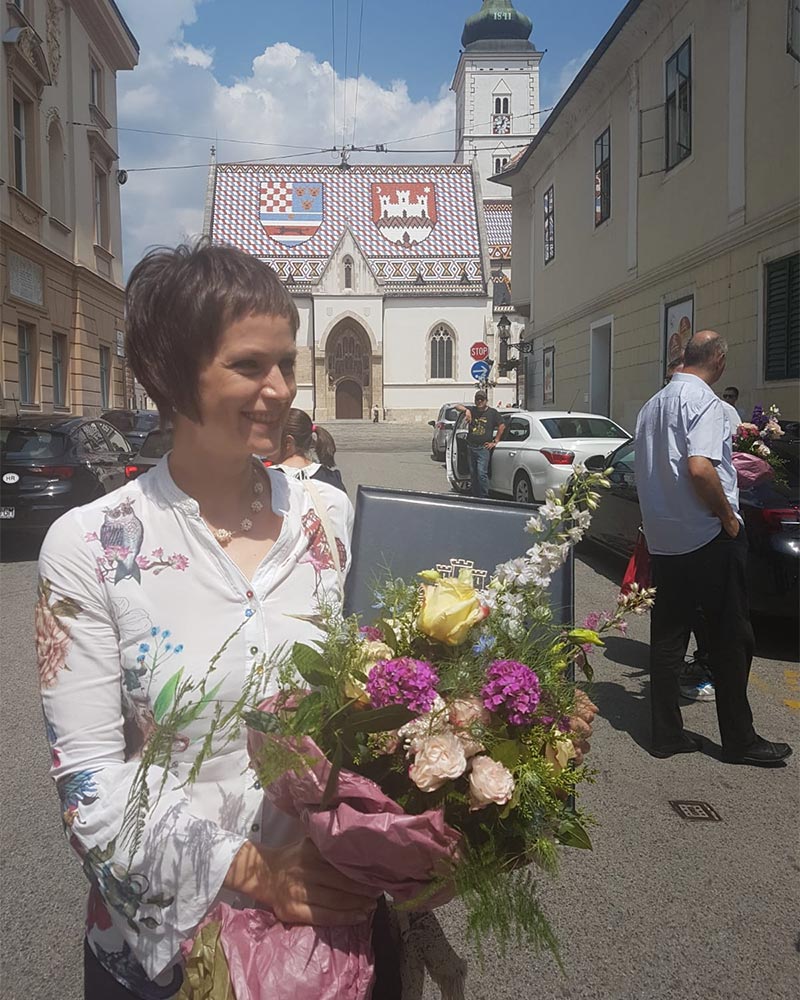 At the Upper Town after receiving the Award

It started with baking my favourite Croatian desserts while I lived in London. I realized I could cure my nostalgia with the scents of poppyseeds and carobs. One whiff was enough to get magically transported to Zagreb or Dalmatia.

My English friends had a different but equally immersive experience. They couldn’t get enough of my sweets. The more they feasted on them, the more they wanted to visit Croatia. Even before getting there, they felt they knew the soul of the country.

So, when I came back, I let my passions for baking and writing talk to each other. I added more crucial ingredients: curiosity and detail. And this is how both my cookbooks came to life.

I travelled to every corner of Croatia to learn about traditional food. And not only the everyday stuff. I dug deep to discover intriguing culinary stories of each recipe. How they came to be, when they are prepared and how they are eaten. 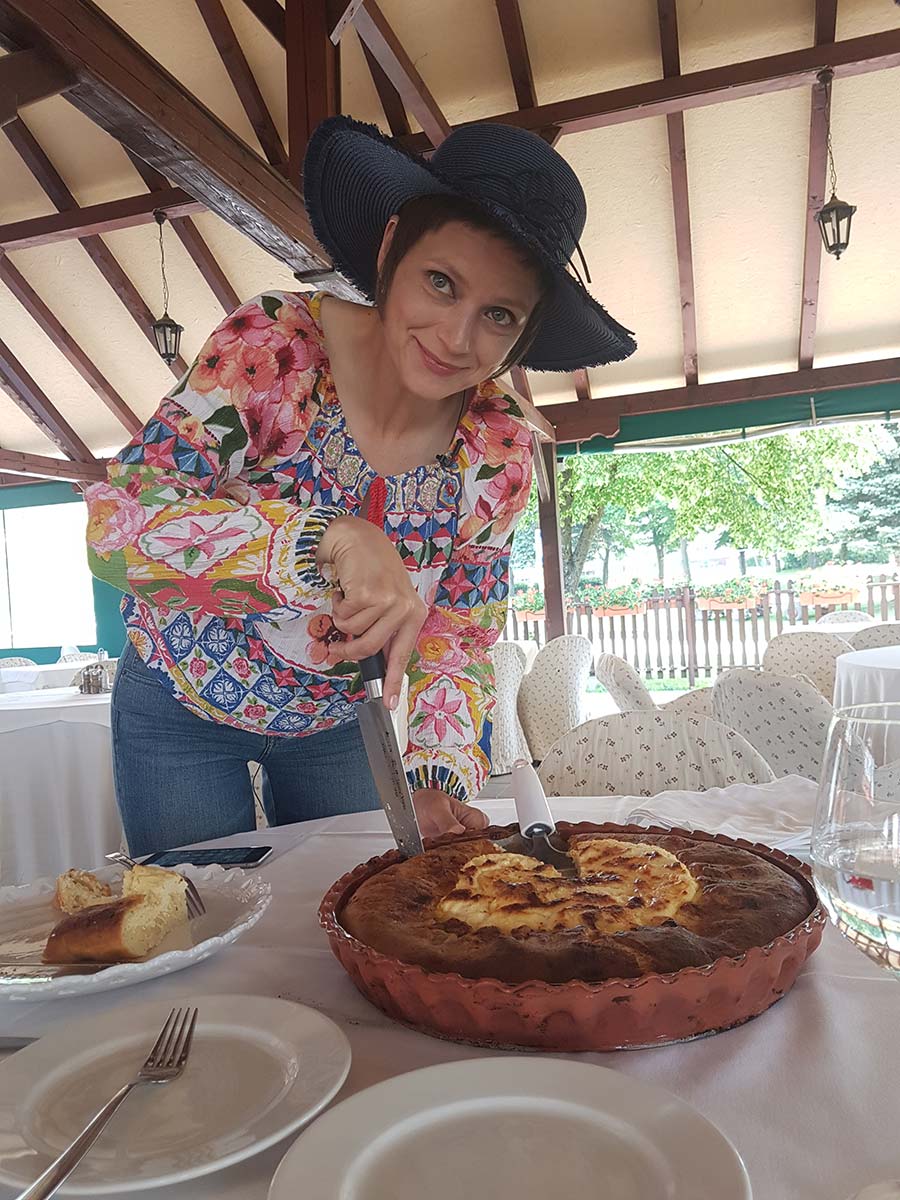 Travelling through Croatia and looking for traditional food

Once I was back in my kitchen, I recreated all the dishes. My goal was to write cookbooks that anyone can use. Not just great pictures, but a deep dive into the preparation method.

I wanted to bust the myth that you can learn to cook only if the skill is passed down to you in person. Both my cookbooks speak to you as if you had your mama or baka next to you, instructing you.

check out the cookbooks

Food remains one of my biggest passions. And not just cooking food, but exploring the culture of food. I value the traditional ways of growing, storing and preparing food.

Hearing stories about how our ancestors treated their food makes me nostalgic. Their gardens were naturally organic. And their pantries and cellars were built in a smart way to extend the life of food. They respected the seasons and embraced the cycles of abundance and scarcity.

So, you guessed it... I am exploring gardening, heritage food and eating rituals that make us healthier and happier.

I am still writing every day!

Join my Croatia fellowship and never miss an article

Become a true Croatia insider by getting to know Croatian people and our culture and customs. Let me help you on this journey by sending you a FREE guide on how to create and cultivate friendship with Croatians.