Zagreb street art controversy: why you should love ‘Gulliver’

There’s a new street mural in Zagreb and it’s gorgeous. A 30-meter long Gulliver is resting on the wall in Opatovina Park, tied by the petty Lilliputians.

Boris Bare (Pimp My Pump) and Dominik Vuković painted it in vivid colours and in minute details. It’s so hyperreal that the model, photographer Hrvoje Zalukar, gest asked in the streets:

‘Are you Gulliver from Opatovina?’

Zagreb street art scene has never been more vibrant. Stunning murals are popping up everywhere, even in the historic part of the city. The Whale and the Turtle, monumental anamorphic murals by the French artist Etien, attract thousands to the Upper Town.

It’s a sign of how transformative public art can be. Because once quiet, almost deserted, Upper Town, has blossomed into a lively cultural hub.

A similar thing happened this summer when the Street Art Park popped up below Strossmayer Promenade. The neglected playground, which used to attract drug addicts, soon became an educational art colony for people of all ages.

I am thrilled to see street art shaking up, even breaking through, long-established boundaries. One to move from derelict suburban buildings into the city centre. And the other to move from the fringes of the art world into mainstream.

Like for example, into the Museum of Contemporary Art. Which happened when OKO painted the west-facing facade of the Museum. Or when Pimp My Pump collective exhibited Arto – the dog mural.

But it’s not only me who rejoices at these changes. Whenever a crumbling wall gets enriched with a mural, Zagreb locals flock to see it. It’s the non-elitist character of street murals that has encouraged more people to communicate with art than they otherwise would.

Foreign travellers, who are used to admiring murals around the world, are fascinated by the Zagreb street art scene. They seek out the work of Lonac, OKO or Lunar. Because these pioneers of Zagreb street art are internationally renowned.

So what is different with the Gulliver mural?

‘Gulliver’ turned up in the central Opatovina Park, on the wall that was derelict and covered by graffiti tags. The striking mural not only refurbished the wall, but it also created a buzz in the otherwise sleepy public park.

As always, Zagreb locals welcomed the painted giant. And foreign travellers took to the metaphor that Gulliver stands for: the meeting and embracing of different world(views).

But then an article in the Croatian press appeared, shredding ‘Gulliver’ to pieces. And so once again, the travelling giant faced a hostile welcome in the land of Lilliput.

I will neither name nor link to the particular article (you can guess my reasons). But I do want to go through the arguments presented, only to give you more reasons for hearting ‘Gulliver’.

In defense of Zagreb street art – the case of ‘Gulliver’

1. The article says that…

‘painted ‘Gulliver’ looks like a drunken manual worker from a Mexican soap opera… slumped with a few tequilas in him, only missing a toothpick in his mouth…’

Does this sound like a serious art review? We don’t hear anything about the motifs, symbolism, or individual artistic expression of the authors. Just slagging off on the basis of someone’s looks.

It’s almost as if you’d discount Mona Lisa by saying she looks as if she’s eaten a lemon. Or bad-mouth Picasso for painting disfigured people.

2. The article says that…

The strongest objection to ‘Gulliver’ seems to be its ‘wrongful’ juxtaposition to the ‘sacred’ city centre.

The author recognizes that the wall on which the mural was painted was rotting for years. Even so, street murals are allegedly not worthy of being so close to Kaptol – the religious seat of Zagreb.

This is quite funny. Because the award-winning Whale by Etien looms over St. Catherine’s Church on Gradec Plateau. Which is also the place with the best view of the Zagreb Cathedral.

We haven’t heard any complaints about the ‘bad contextualization’ for this mural. Maybe because Etien is not a local artist. And Croatians often have a chip on their shoulder when it comes to their own art and culture.

The fact is that Bare and Vuković obtained a legal permission to paint ‘Gulliver’. And from the Kaptol administration itself! The Church doesn’t seem to mind…

3. The article says that…

‘the Gulliver mural is a cultural, artistic and civilizational breech… Because it ‘should have stayed in a backwater industrial stretch, inside a socialist-realist underpass, or in a deserted building on the outskirts of Zagreb’.

If this isn’t an elitist culture talk, I don’t know what is. And while other countries protect their industrial and socialist heritage, this author renounces it as uncivilized.

Also, the centre-periphery division, both in terms of geography and culture, is a passe.

Leading intellectuals remember it only as a lesson. That some of the greatest artistic achievements happen right there on the periphery. On the outskirts.

4. The article says that…

‘the Gulliver mural is a (mis)deed of wannabe street artists…’

Let’s focus on the word ‘wannabe’. And let’s talk about art authorities. What kind of approval gets a person the title of the real artist? An art degree, a museum exhibition? If so, Bare and Vuković tick both boxes.

A dedication to humanitarian causes? As most good art expresses? Tick.

You could have witness that in the Street Art Park this summer.

When ‘wannabe’ street artists used their talent to save rescued dogs. To protect the Adriatic sea from overfishing. Or to give a new lease of life to an unused city space.

The thing is, Zagreb ‘Gulliver’ is already a much beloved city sight. And local street artists don’t need my endorsement. The world sees them, and admires them.

But just in case you didn’t know that the giant traveller sleeps in Opatovina Park.

So, head over there and say hello to the gorgeous Zagreb ‘Gulliver’. 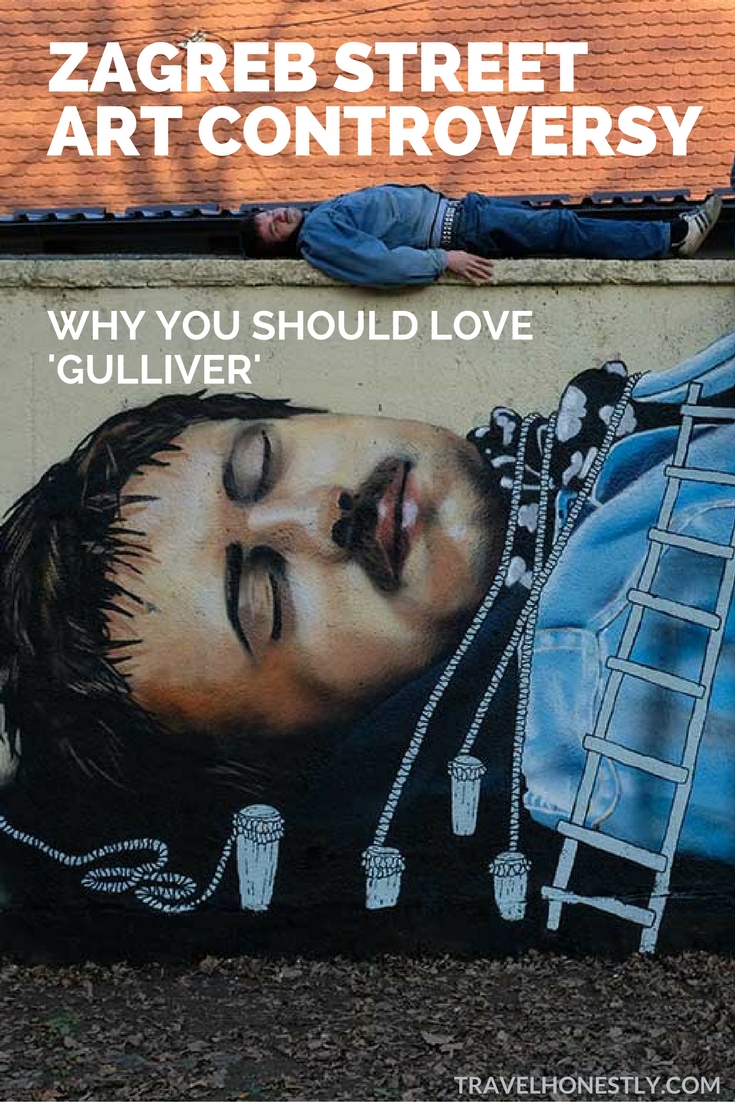