Croatian sausage tells it all about the country and the people

It’s the highlight of every barbecue and the centrepiece of a cold starter. It hangs in people’s attics for an extra layer of flavour from the wind, but it also hangs from the vines on St. Vincent Day to secure a good grape harvest.

Croatian sausage does all that in a single, recognizably phallic shape. If you go beyond its taste, you’ll realize Croatian sausages are not only food. No national holiday or cultural custom goes without them, and they even feature in everyday expressions and songs.

The allusion of kobasica [Croatian for sausage] to sexuality is more than obvious. So, it’s OK to giggle. But Croatian sausage keeps other aces up its sleeve: it speaks more of the country’s many faces than any other food or drink.

So if you really want to learn about the world most popular and up-and-coming destination, get ready to meet the Croatian domaca kobasica [homemade sausage]. Read on even if you’re a vegetarian!

Croatian sausage: the foundation of our national identity

#Croatian sausage is the best

Bragging about one’s sausage is not exclusive to Croats. The British rave about their sausage and mash, the Spanish conquer the world with their chorizo as successfully as they used to colonize with force. And the Germans won’t let you leave Berlin without stuffing your face with their currywurst.

There’s hardly a nation that doesn’t try to prove its superiority via sausage. Which is OK. And for the sake of this post’s argument, let’s agree that the Croatian sausage is the best in the world. Why? Because the Croats say so.

#Croatian sausage is the oldest

Let’s examine some reasons why local sausages are the best. For one, it’s the tradition, a Croat says. Our fathers learned from their fathers, and from fathers of their fathers. Croatian sausages recipes are never written, but passed down as a family treasure.

And when many families prepare sausage in the same way, what you get is a regional specialty, such as kulen: a spicy and meaty sausage of a characteristically large profile. Croatian Kulen is proudly made in Slavonia and Baranja.

This wide sausage of the regal looks is loved across the country. It recently received a protected status in the EU, so Croats finally got their sausage sovereignty.

#Croatian sausage is the purest

The most famous Croatian meat brand Gavrilović has kept the sausage tradition since 1690. Their Winter salami from 1891 was even tied with a ribbon in the national red, white and blue colours. But when it comes to purity, small-scale production and home-fed animals are the key.

It’s where the micro-production shines: each family making their own sausages. Even urban folks without rural connections sometimes team up with friends, buy meat and make sausages at home. And failing that, there are always guests who bring them as gifts. Similar to coffee, bringing along domaca kobasica when visiting friends is always a good bonding strategy.

#Croatian sausage is the most exclusive

There’s no rushing Croatian sausage. Time means quality and we all know that when we’re made to wait for something, its value goes up.

On Croatian family-run farms animals grow as nature intended. Even when they become sausages, they take their time. Dry-curing sausages in Istria can take up to 30 days. During that time, their surface gets covered in white mold, which adds a delicious layer of flavour.

#Croatian sausage has most substance

I never really liked English sausages. It seemed wrong to me to have breadcrumbs in the sausage. The British may be proud of cutting down on meat content in their recipe, but what is sausage if not meat?

Croatian sausage contains little else apart from meat. And it’s almost always pork meat. Spices, yes. The rest is pure pork, wrapped in real intestines. It doesn’t get more substancy than that. For flavour variations, we sometimes add other types of meet, like venison or wild boar, never apples or other ‘ridiculous’ veggie things. Truffles are allowed!

For a Croat, vegetarian sausage is a contradiction in terms.

Emperors and kings all around the world celebrated their victories by building obelisks. And you know what an obelisk looks like? Sausage, of course. There’s nothing like a hard erect object rising up to the sky to legitimize the nation’s power.

Metaphorically speaking, nation is a masculine entity, and it’s only natural that every man wants to have the best sausage in the world. No one’s ever heard of a nation bragging about having the best wheat or pumpkin.

Now imbued with the metaphoric power of phallus, Croatian sausage plays an important role in fertility rituals. Next time when you visit the amazing Zagreb Advent, ask yourself why sausages jump out from every food stand. When it’s not snowing, it’s sausaging. We eat them as a way of thanking the old year for the fruits it bore us. Then we eat some more to let the new year know we need another rich and happy one.

In Slavonia, on St. Vincent Day, sausages are hung on the vine to call for the abundant grape harvest. They get sprinkled with wine drops and holy water. Does it work? I don’t know. But as the boy from the Matrix said ‘Neo, I believed’ and Neo delivered, you too can try. If you believe in sausage, sausage will deliver.

Now when it comes to fertility, men and women haven’t changed their roles since the dawn of time. With other household duties there may be overlapping and exchanging places. But with the metaphorical sausage, this is not the case.

In Croatia, homemade sausages are always made by men. They grind the meet, create sausage recipes and fill them into shape. Women always clean the intestines and make sure they are ready to receive the filling.

Good sausage is precious because it doesn’t last forever. Not that it goes off quickly. But just as virility is an expression of youth, so does sausage always run out too soon.

There’s even a saying in Croatian that exemplifies this: ‘ima dana više nego kobasica’ [there are more days than sausages]. This means that sausages would usually get eaten by late springtime – much sooner than the new batch in autumn was made. Compared to an average person’s life, it would mean that maturity is often, and sadly, sausage-less. Of course, not for everyone!

Croatian sausage is a way of life

Continuing with sausage-based proverbs, lets remember this famous one by Otto von Bismarck. ‘Laws are like sausages, it is better not to see them being made’.

There is really great wisdom in how people came about making sausages. In order to use up lower-grade meat, they mixed it with spices and gave it a worshipful shape. The meat is hardly of the same quality as pork tenderloin, but the metaphorical power of sausage more than makes up for it.

# Croatian sausage and the middle way

It may be inappropriate to relate Buddha’s teaching of the middle way to sausage. But hear me out. This great sage taught us that accepting our dislikes in the same way as our likes is the way to enlightenment.

There are new trends in the Croatian sausage world to cut out as much fat from the recipe as possible. Sure, lean and healthy is in. But not for sausage. Because fat, our most feared enemy, is what keeps sausage from spoiling. It preserves it so the virility can last. Don’t you just love life’s contradictions?

So, if you love eating sausages, come and visit us in wintertime. November is your perfect opportunity to witness the world’s best sausage being made. And if this is way too much meat for you, just enjoy the fertile metaphors. And treat yourself to some delicious Croatian sweets. 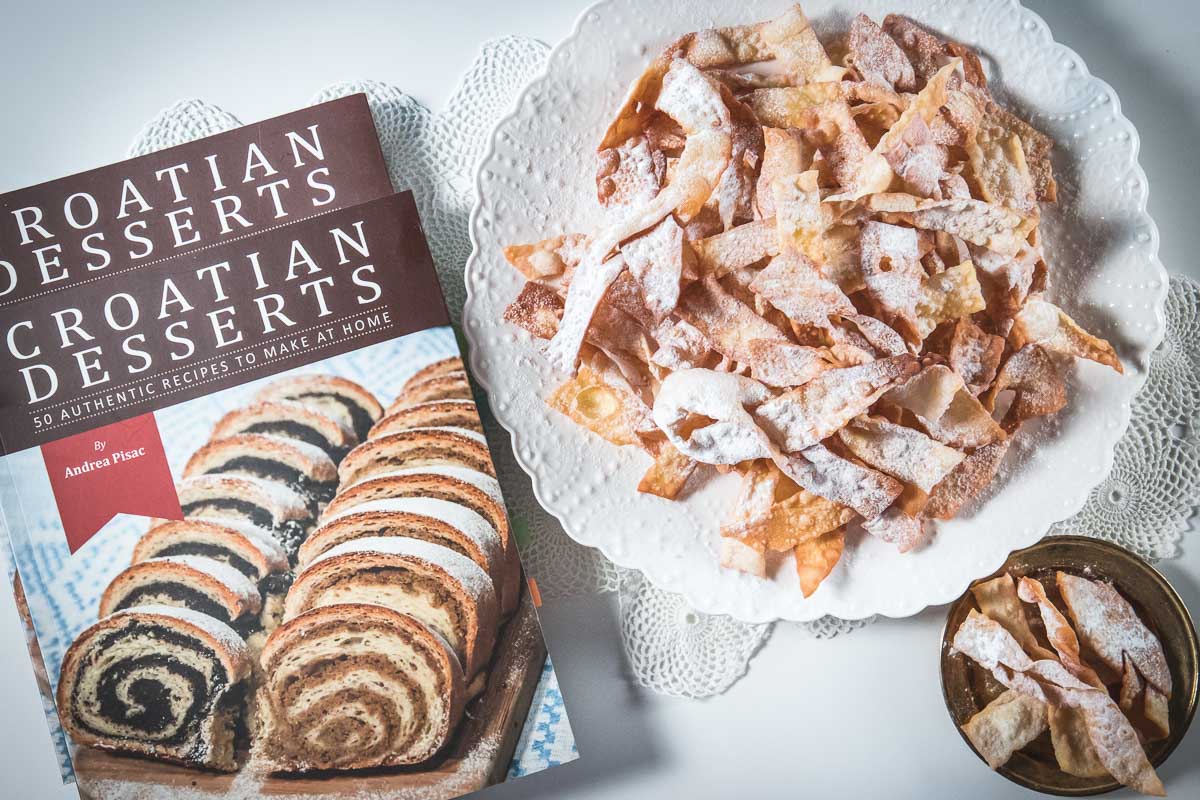 Look for kulen by OPG Matijević and Istrian sausage with truffles by Zigante. Both can be found  in Natura Croatica shop in Preradovićeva Street 6.

In regular shops, look for our favourite dry-cured sausages sremska kobasica, or fondly sremica, and cajna kobasica. If you’re eating grah (Croatian beans stew), you need a semi-dry sausage, such as kranjska kobasica.

Over to you now – let the world know Croatian sausage is the best! Share this post so we can compete with the Spanish chorizo and the German currywurst! 🙂 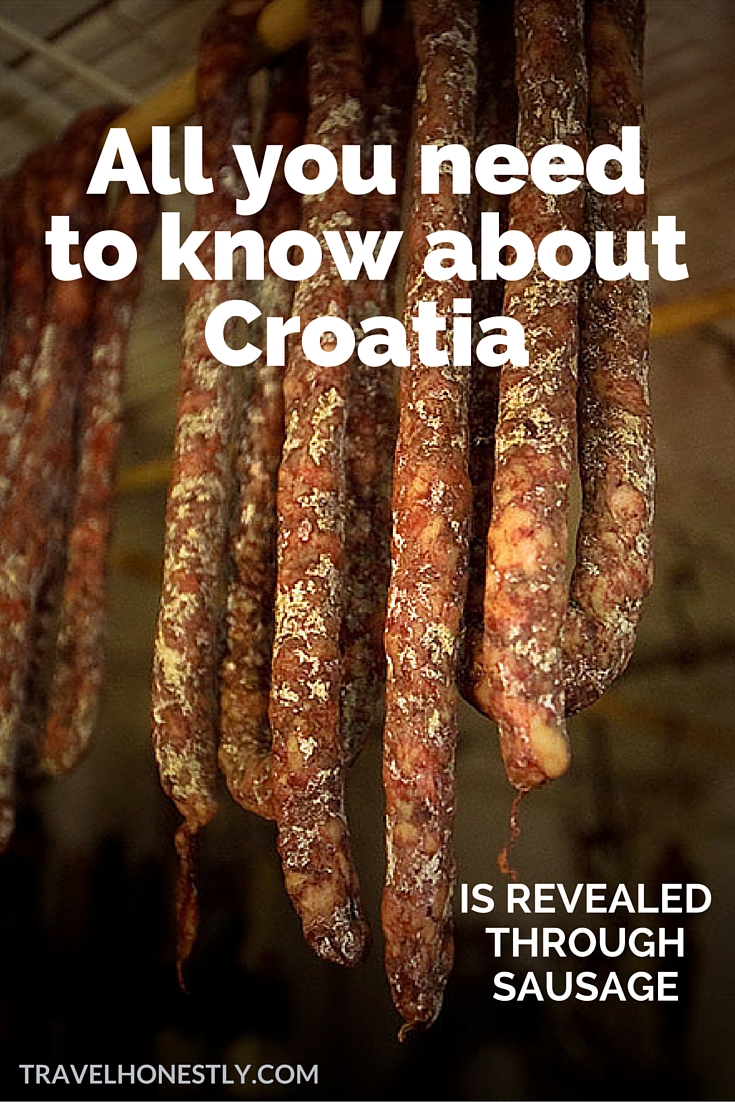 Croatian flours: how to solve the conundrum and bake like a pro

How to make snenokle: a simple but perfect summer dessert

Croatian pantry staples: food essentials that every home cook should have