Using a toilet outside my home’s comfort is not among my favourite experiences. Apparently there’s even a name for this ‘condition’: to be pee-shy.

I don’t know if name-calling lightens things up or makes them worse. Since once there’s an official word for how you feel, there’s no escaping the ‘condition’.

A great thing, however, came out of my pee-shyness:

Based on my thorough investigation of the best Zagreb toilets, this fun toilet trail will help you track down the most comfortable and prettiest loos in the city. Everyone needs to go when they need to go, right? – even the emperor (as you’ll see later in the blog).

But that’s not all. I’ll also show you how to pee in style.

Scouting out the best Zagreb toilets will take you a step further from just honouring your biological need. Toilets – these secluded private quarters – have their stories to tell. And these stories are quite public, spanning a century of Zagreb’s cultural history.

Need to pee? No need to panic!

I attribute my trouble with toilets to the socialist neglect of the sacred cubicle.

When I was a teenager – in the last decade of socialism – public toilets were truly grim. Cafés cared very little about the cleanliness and decor of their restrooms. My big socialist nostalgia aside, I grudgingly admit: the socialist toilet culture was non-existent.

There was never any toilet paper, no soap, no hand towels, often no key in the door, the toilet seat was either dirty or completely missing, everything smelt of stale urine, the floor was usually flooded and your trouser legs would get drenched in godknowswhat… please stop me here.

If you’re naturally pee-shy or travelling in a foreign city and suddenly you need to go – well, you don’t want to go to a place like this. And in Zagreb you won’t. Because the city has not only revived its toilet culture, but taken it to artistic heights.

Imagine sitting in a swank cafe on the British square, teeming with happy people who have just snatched the freshest of fruit and veg or a rare quirk from the antiques stalls. The day is sunny and your coffee is perfect. You ask the waitress for the toilet directions and what she tells you is this: there’s no toilet, we use the public one on the square.

A panic sets in. Not another dirty public toilet, you frown. A downer like this might seriously spoil what started as a glorious day. But no – not in Zagreb and not this time.

The British square toilet is the oldest functioning public toilet in Zagreb. Built in 1908, and only slightly run down, it celebrates the graceful art deco architecture.

The front has been turned into a kiosk. So, only if the need or curiosity prompts you to search the entrance, will you see its glory: extra clean, with abundance of toilet paper and hand towels. It smells fresh. The door can be locked and the black-and-white checkered floor tiles are never flooded.

Whenever I have coffee in Kava tava on the British Square, I make my way to the toilet. I keep checking it out, taking more and more photos of it. I still can’t believe that a visit to the public toilet can be stress-free. Or that its cubicles have as much to say about Zagreb’s cultural life as the chic cafes we’re usually drawn to visit.

The only person I meet there is the ‘Klosetfrau’ – the cleaning lady who keeps it neat and tidy. ‘I clean after every person: I make sure there’s plenty of toilet paper and I spray it with air-freshener’, she says when I ask her about her day. So there you go: the British square establishment gets more regular cleanups than your own bathroom!

The British Square toilet is not the only epitome of the early 20th century style public bathrooms. In my aimless walks, I discovered similar pee gems housed in distinctive green houses.

If you love parks, look out for the toilets in the Nazor Park and the Botanical Gardens. These two and the one near the Faculty of Law are siblings. Built around the same time, they have kept many original art-deco features. Just look up to the ceiling when you’re washing your hands, and you’ll see charming glass and cast iron decorations.

Clean and private, they perfectly perform their toilet function. But you can also think of them as exhibits of the city’s cultural heritage. So, enter the turn of the century toilet museum. Get the feeling for the spirit of the time when Zagreb bourgeoisie valued ‘Spanzieren’ (walking) through the city and, above all, the privacy for their bodily needs. It was when the toilet culture was born.

Yet the bourgeoisie was not alone in needing to pee in public. When the Croatian National Theatre building was opened in 1895, the emperor Franz Joseph attended in person. For that occasion, a special toilet – ‘worthy even of the emperor’ – was built in the Royal box. It couldn’t be just any old toilet. Designed with a touch of art, its function of nature was taken to the heights of culture.

Zagreb toilets: from smell to swell

In 2006 the oldest and most frequented Zagreb public toilet on the Jelačić Square closed down. Though its future is uncertain, people still recount funny stories of tourists mistaking it for a metro entrance. Zagreb, by the way, has no metro.

In the same year, Zagreb’s Mayor ceremonially opened a new public toilet close to the Europe Square: the first one in 50 years. The metaphor behind it? I’d say: the dark ages of socialism are behind us, we’re back to being part of the cultured Europe. Even when it comes to peeing.

Toilet cleanliness was actually revived in the 2000s with the new sanitary legislation. When you went to a café toilet, you’d see a chart of regular cleanups with a cleaner’s signature hanging on the door. You’d feel like a person whose biological needs were treated with respect. OK, maybe you weren’t Austro-Hungarian bourgeoisie, but at least the toilet was not just a shit hole.

And the way up for toilets didn’t stop there.

Zagreb toilets with an artistic twist

It’s not the Marcel Duchamp’s pissoir type of art but there are some Zagreb toilets worthy of artistic appraisal.

In the last few years Zagreb has showcased cafés and restaurants with exquisite interior design. The styles vary from urban chic, industrial vintage to romantic retro with ambiance spreading to toilets as well. Restrooms are not only meticulously clean but offer an arty experience.

I’m always searching for the candidates for my Zagreb pee map. You’ll see me nipping to the loo, even when I don’t have to go. One of my favourites is the bathroom in the Dubravkin put restaurant. An exquisite example of urban elegance, you’ll want to linger on in their spacious mirror room – perfect to touch up that make-up.

Even if you’re not staying in the Swanky Mint hostel, visit their café with a quirky take on the industrial vintage toilet design. I’ve seen old tyres used as floaties in the sea or in gyms, but never as part of a sink design!

Hemingway Lounge houses a loo with another great item used as a sink: a black enamel saucepan. No, it’s not a hand-me-down from someone’s kitchen but a creatively thought-out sink.

Can Zagreb toilets get any artier? I say yes.

The Zagreb architect Željko Kovačić did a fascinating project of decorating the toilets in the Museum of Art and Crafts. Smiling faces from paintings are used instead or typical ‘ladies’ or ‘gents’ signs. And inside, colourful tiles celebrate the craft of ceramics.

Are you ready for some great museum hopping in Zagreb?

Gone are the dark ages when pee places were hidden holes serving only our biological function. In Zagreb they again have style and culture. Are you ready to go on the best Zagreb toilet quest? Let me know if you come across another toilet worthy of being on the trail.

Oh, and here’s my ultimate list of other super cool things to do in Zagreb! 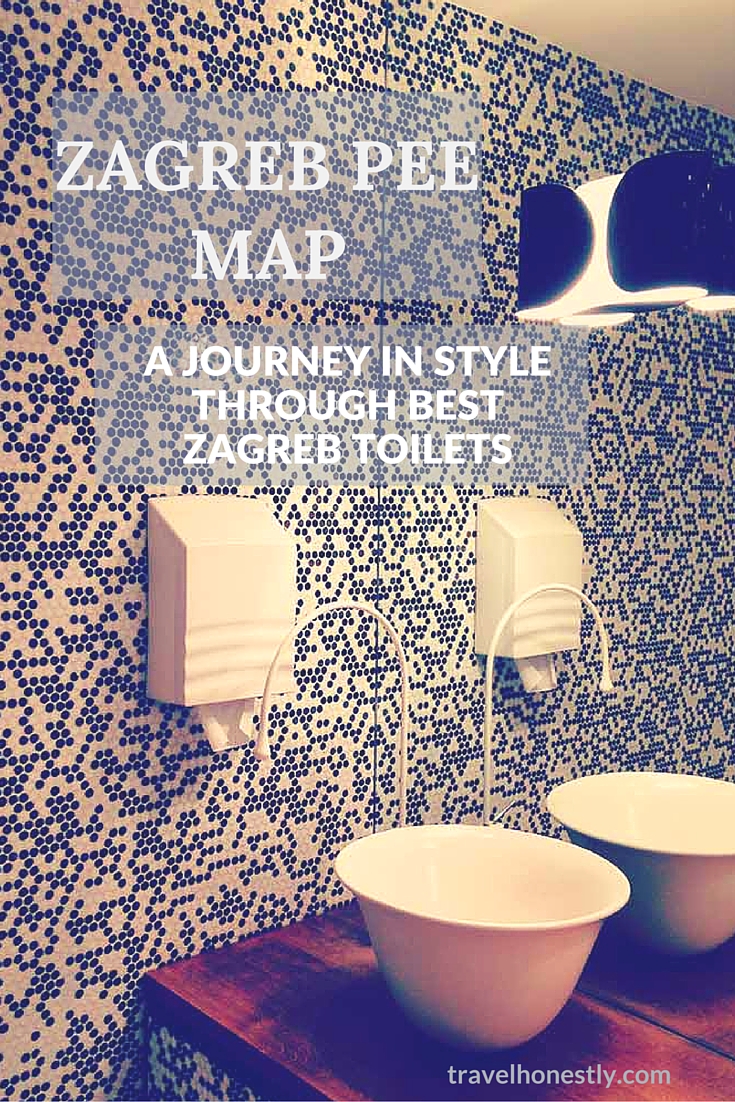