Parks and green spaces are part of any city’s tourist offer. If you are a fan of slow travel like me, you will probably seek out the cities advertised as green.

We all know of London’s famous Richmond park or Hampstead Heath. And when in NYC, we would no doubt visit the Central Park. 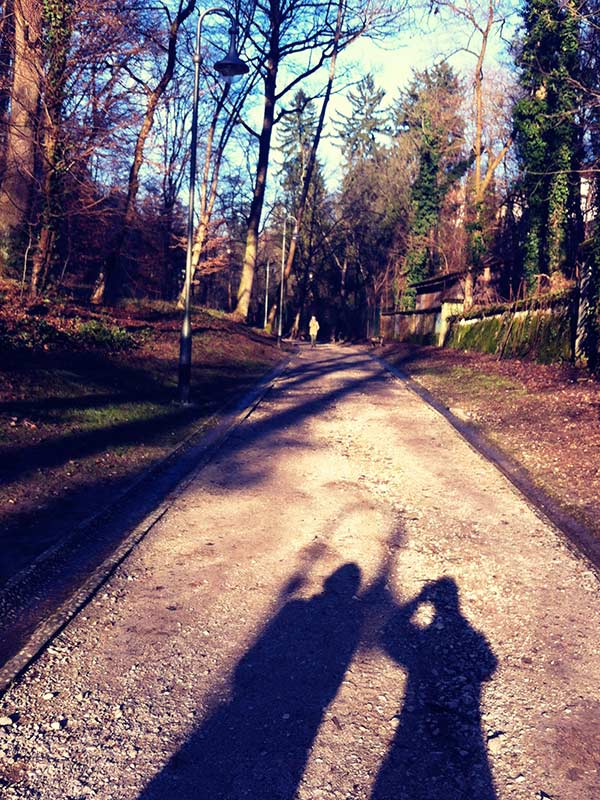 Tourist guides suggest visiting Maksimir Park – the lungs of the city. Or strolling around the Botanical Garden. Real walking and hiking aficionados can enjoy countless trails leading from the city to the Medvednica mountain.

I’d like to suggest something different. Neither a landscaped park nor a hiking trail. It’s a lesser known route so lush and wild you won’t believe you are in the city centre.

It’s leafy but not overly cultivated, uphill but not a real hike, and it’s urban but not crowded.

When I took a British friend there, he couldn’t stop sighing in amazement, wondering why no one had told him about this walk.

That afternoon, he admitted, completely changed his experience of the city. Hopefully it will help you have the same revelation.

Do you know how to use wikiloc app?

The walk starts at Dežmanov prolaz [Dežman passage] – an entrance into the beautiful Tuškanac forest. It meanders uphill along the leafy path Dubravkin put until it reaches the open green summit Cmrok. The way up is forested and serene, making you forget you’re in the city at all.

On the way back the walk follows Jurjevska street, famous for the amazing early 20th century villas. Some are slightly decrepit while others have been renovated.

You’ll get a sense of the once bourgeois culture of Zagreb, now criss-crossed with different layers of the city’s history.

Jurjevska ends at a small charming square, Ilirski trg: a northern entrance to the Upper Town. Here is one of the oldest coffee shops in Zagreb – Palainovka – built in 1847 as the first ‘kavana’ north from Ilica.

Quirky and cozy, it used to be a hide-out of Croatia’s great writer Antun Gustav Matoš.

After a refreshing drink, the walk takes you to three best small museums of the Upper Town: Atelier Meštrović, Croatian Museum of Naïve Art and Museum of Broken Relationships.

Some are more famous than others, but they are all worth visiting. The best thing about them is that they are full of character, well laid-out and can be explored in less than an hour.

After a visit to museums, stray off the trail even though it takes you to Ban Jelačić Square (main Zagreb square). Find another great coffee place and keep charting your own walk.

Stop and admire along the way:

Statue of the writer Miroslav Krleža

At the beginning of Dubravkin put there is a statue of Miroslav Krleža, one of the most important Croatian writers. The writer and his wife Bela lived in the house at the top of the hill on the left-hand side.

Krleža’s statue is a design of architect Željko Kovačić and sculptor Marija Ujević-Galetović. It was revealed in 2004 to mark the 30th anniversary of Krleža’s death.

Notice that the statue stands in a woodland clearing, a place with history longer than Krleža’s time.

According to some Zagreb legends, this is where local witches got burnt a few centuries ago.

This woodland trail connects the city centre with the Cmrok meadow.

In the second half of the 19th century it was the favourite walking route of Sofija Stockau, wife of Ban Jelačić. The path was originally named after her but it later changed into Dubravka path after a literary heroine from Ivan Gundulić’s work.

This green expanse surrounded by woodland offers beautiful views of the city. No one quite knows where the name Cmrok comes from.

One possible explanation is that it was short for ‘Zum Rok’ or at Rok’s referring to the restaurant that once used to be there.

Stop for a while at Cmrok, breathe in the fresh air and find the famous Mirogoj cemetery dome on the skyline.

The whole street is a monument to the once bourgeois Zagreb. Admire the original, now slightly run down, urban villas, juxtaposed to the more modern ones.

I prefer the Art Deco style, but later architecture is no less interesting, telling you of different historical and political developments of the city.

Half-way down Jurjevska, on your left-hand side, there is a small chapel. Don’t miss poking your nose into the courtyard – it hides an atmospheric old cemetery and moss-covered tombstones.

Back in the 14th century this was the burial grounds only for the poor. A few hundred years later it transformed into the main Upper Town cemetery.

A number of famous writers were buried there. Once Mirogoj cemetery opened in 1876, the one in Jurjevska was exhumed and closed.

One of the oldest and best coffee shops in Zagreb hides behind a chapel on Ilirski trg. In the old days it had a piano and a famous regular – Croatian writer A.G. Matoš.

In his youth, Matoš spent time in Paris from where he brought back his love of cafés. Palainovka oozes with ambience and during summer is the coolest terrace in town.

I love compact, well-organised museums that don’t give me a feeling of overwhelm.

All three museums are like that, but my favourite is the Atelier Meštrović. The sculptor lived and worked in this house. Enjoy some of Meštrović’s best work and get a unique glimpse into an Upper Town private interior.

I hope this walk stretched your legs a bit. You’ve uncovered a different Zagreb for yourself and became a true flâneur. There is a kind of intimacy born from aimless city roaming, which I believe is a true purpose of travel.

Did you enjoy uncovering the non-touristy Zagreb?

If so, then check out plenty of other unique things to do in Zagreb. Use my ultimate guide.

Is it a joke or do whales and mammoths still pop up in Zagreb?

Who else wants a selfie with a dead Croatian writer? Meet Zagreb immortals.

Leafy Zagreb walk – the coolest walk in the city

Zagreb joins global walking festival – you can join too

Travellers’ Walking Manifesto – made in Zagreb for the world